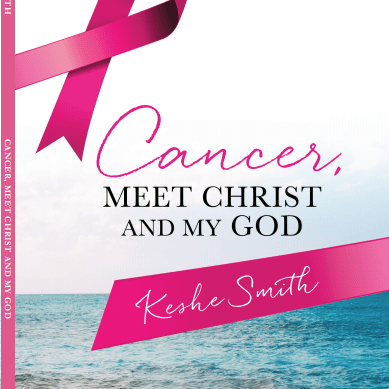 Keshe Smith was about to make breakfast when her life changed in an instant. She fainted. Regaining consciousness minutes later, Mrs Smith turned down her husband’s offer to take her to the hospital. After all she wasn’t sick and the last thing she wanted was for him to be late for work. Her fatigue was likely due to a busy schedule, she reasoned, a combination of work, church, and weekly hospital visitations to the sick and dying. Considering every possible scenario that October morning, Mrs Smith looked at the bright spot, perhaps a couple of days off from work. Worst-case, she was anemic, which would explain her tiredness. No such “luck.”

The government worker’s life was turned upside down when she was diagnosed with Acute Myeloid Leukemia (AML), a cancer of the blood and bone marrow which worsens quickly if left untreated. In her new book, Cancer, Meet Christ and My God, Mrs Smith take readers on her journey of faith, healing and hope amidst affliction. She recounts the process of persevering through three rounds of chemotherapy and recovery, sharing the songs and scripture versus which helped bring her through the ordeal.

“At first, I did not want chemotherapy treatment, I wanted a miracle from God, and I wanted it my way, but He led me His way and I am so glad that He did.”  Following her 2008 diagnosis, Mrs Smith was hospitalized for several days. During that time, she received blood transfusions and platelets.  Local doctors advised her to begin treatment immediately. She rejected their recommendation and traveled to Miami for a second opinion. American physicians confirmed the Bahamian doctors’ diagnosis.  Mrs Smith returned to The Bahamas and resumed working. Days later, a sharp pain on her side sent her back to the hospital where she was admitted for a second time. This time around it was liver inflammation.

Her doctor recommended she travel by air ambulance to Miami’s Jackson Memorial Hospital to begin cancer treatment. Her husband, Julian, agreed even though the patient remained reluctant. At Jackson Memorial, Mrs Smith leaned on her spouse and other relatives for the family support crucial to facing a cancer diagnosis. “During my first round of chemotherapy treatment my body was weary. I lost strength and energy instantly,” she recalled.  “Chemotherapy treatment makes a patient feel like giving up. As I lay in bed, receiving chemo, my spirit was very low and I remembered the song, I’m trusting in You Lord. I sang that song with tears in my eyes.

I was singing with my lips but in my spirit I was crying out to Jesus to rescue and help me.” Her chemotherapy regimen was administered in three cycles. Each cycle lasted five weeks with treatment delivered five days of the week. During her first cycle, the side effects were numerous: lesions, mouth sores and peeling skin on her hands and feet.  “My lips were swollen. I experienced skin discoloration. My weight changed drastically. I lost over fifty pounds. My long flowing black hair was no more,” she recalled. “I could not believe what I was seeing. The hair which remained was burnt and there were patches all over my head. Surely, if I was not constantly in prayer and reading the scriptures, which strengthened me, I would have been discouraged and in a hopeless condition.”

The irony in her situation did not escape her. As a member of her church’s Hospital Ministry for over a decade she prayed over the sick and dying. Now, her faith was being tested. Twelve years after passing through her darkest hours, Mrs Smith is sharing her survival story to bring hope to others. “I want to strengthen those who are fighting the disease as well as strengthen husbands, mothers, sisters, aunts, all family members. I want to encourage others who might be sad and depressed over their diagnosis,” she said.  “I want people to know that the diagnosis does not have to be a death sentence. With faith in Jehovah Rapha, the God that heals, all things are possible. Nothing is impossible.”  Cancer, Meet Christ and My God goes on sale next week at Doc’s Pharmacy on Robinson Road for $24.95. Mrs Smith can be reached via email, Keshesmith@yahoo.com or connect with her on Facebook at Keshe Smith.