Home News Alert #14 on Tropical Storm Isaias issued by The Bahamas Dept. of... 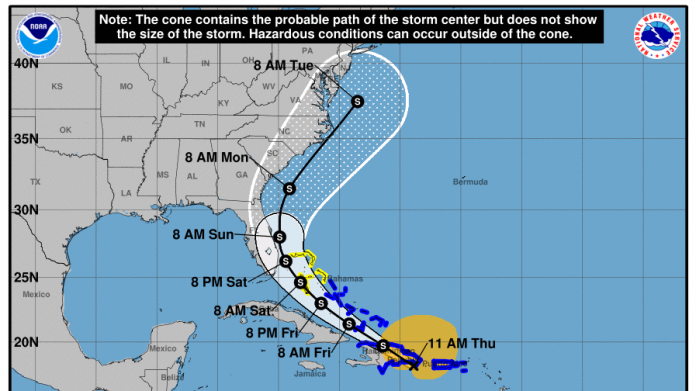 A Tropical Storm warning also remains in effect for the Turks and Caicos Islands.

A Tropical Storm watch continues for the Northwest Bahamas. This includes the islands of Andros, New Providence, Eleuthera, Abaco, Grand Bahama, Bimini and the Berry Islands including the neighboring Cays.

Isaias is moving towards the Northwest near 20 mph, and a West-Northwestward to Northwestward motion with some decrease in forwards speed is expected over the next couple of days. On this forecast track, the center is Isaias will move over Hispaniola today and move near the Southeast Bahamas and the Turks and Caicos islands by tonight or early Friday. Isaias is forecast to be near the central Bahamas Friday night and approach the Northwest Bahamas Friday night and Saturday.

Maximum sustained winds are near 60 mph with higher gusts. Some slight weakening is possible as Isaias moves over Hispaniola today. Re-strengthening is forecast on Friday and Friday night.

Localised flooding are expected throughout The Bahamas and the Turks and Caicos Islands as Isaias is forecast to produce rainfall amounts of 4 to 8 inches.

Residents in the Central and Southeast Bahamas and the Turks & Caicos Islands should rush to complete all preparations to mitigate damages due to flooding and secure all loose items around their property. Resident in the Northest Bahamas should now begin to do likewise.

Residents are urges to follow all advice given in alert messages.