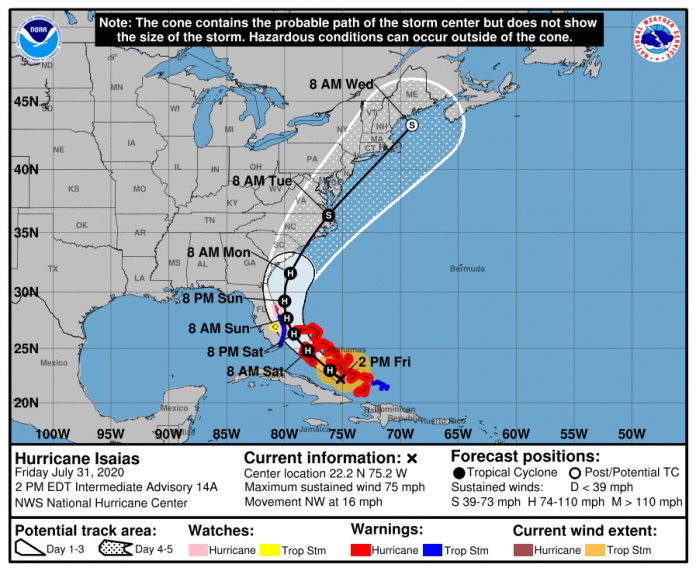 Hurricane warning has been discontinued for Inagua Islands and the Turks and Caicos Islands.

Hurricane warning remains in effect for the remainder of The Bahamas.

Isaias is moving toward the Northwest near 16 mph, and a general Northwestward motion with some decrease in forward speed is expected for the next day or so followed by a turn toward the North-Northwest. On the foreacast track, the center of Isaias will continue to move into the Central Bahamas Tonight, and move over the Northwest Bahamas Saturday and near the East coast of the Florida Peninsula Saturday afternoon through Sunday from Inagua and will pass West of Acklins, Crooked Island, Long Island and Exuma, and East of Ragged Island today. Isaias is expected to impact New Providence and the Northwest Bahamas tonight and tomorrow.

Maxinum sustained winds are near 75 mph with higher gusts. Strengthening is expected later today and tonight, and Isaias is forecast to remain a Hurricane for the next few days.

Storm surge of 3 to 5 feet above normal tide levels can be expected along coastal areas throughout The Bahamas.

Localized flooding is expected throughout The Bahamas and the Turks and Caicos Islands as Isaias is forecast to produce rainfall amounts of 4 to 8 inches.

Residents throughout The Bahamas except for Inagua and the Turks and Caicos Islands should rush to complete all preparations to mitigate damages and secure all loose items around their property. Residents are strongly advised to remain indoors while experiencing Hurricane ands Tropical Storm force winds. Tornadic activities are possible in Sever Thunderstorms.

Small craft in The Bahamas and the Turks and Caicos should seek safe Harbour and remain in Port due to dangerous swells ahead, during and after the passage of Isaias.