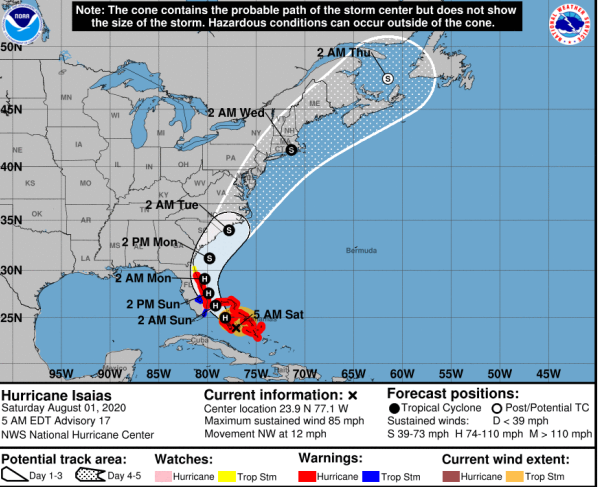 Isaias is moving toward the Northwest near 12 mph, and a general Northwestward motion with some decrease in forward speed is expected for the next day or so, followed by a turn toward the North-Northwest late on Sunday. On the forecast track , the center of Isaias will move onland Andros in the vicinity of Fresh Creek at about 10am, and exit the island just South of Red Bays at about 2pm today.

Residents in North Andros along this path will experience a brief calm and are advised not to venture outdoors during this period. Maximum sustained winds are near 85 mph with higher gusts. Little change in strength is expected through Sunday, and Isaias is forecast to remain a Hurricane during this time.

Residents in West Grand Bahama will begin to experience strong tropical force winds this afternoon that will continue through tonight. Localized flooding is expected as Isaias is forecast to produce rainfall amounts of 4 to 8 inches.

Small craft in The Bahamas and the Turks & Caicos should seek safe Harbour and remain in Port due to dangerous swells ahead, during and after the passage of Isaias.