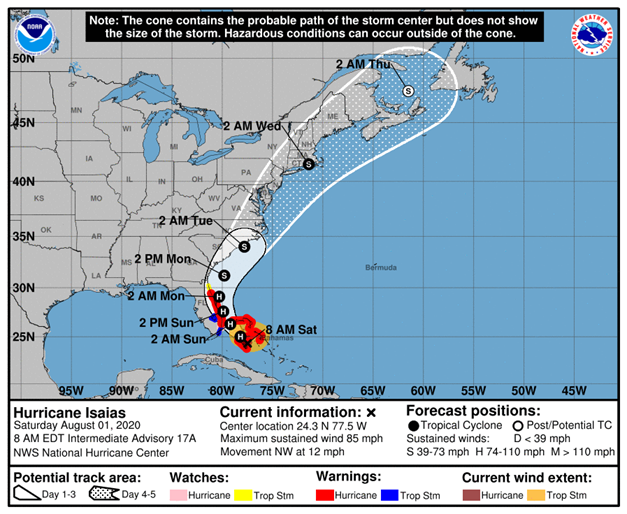 Hurricane warning for the central Bahamas is discontinued as islands of Exuma, Cat Island, Rum Cay, San Salvador and Long Island. The all clear is now given; however, these islands can still experience severe thunderstorms associated with the outer-bands of Hurricane Isaias throughout the day.

Hurricane warning remains in effect for the Northwest Bahamas. This includes the island of Andros, new Providence, Eleuthera, Abaco, Grand Bahama, Bimini and the Berry Islands including the neighboring Cays, a Hurricane warning means that Hurricane conditions are being experienced or could be experienced somewhere in the warning area within 36 hours.

At 8 am edt, The Bahamas Department of Meteorology Radar located the center of Isaias near latitude 24.3 degrees North and longitude 77.5 degrees West or about 2 miles North-Northeast of Congo Town South Andros, 30 miles Southeast of Fresh Creek Andros, 170 miles South-Southeast of Freeport Grand Bahama and 50 miles SOuth of New Providence.

Isaias is moving toward the Northwest near 12 mph, and a general Northwestward motion with some decrease in forward speed is expected for the next day or so, followed by a turn toward the North-Northwest late on Sunday. On the forecast track, the center ofIsaias will move onland Andros in the vicinity of Fresh Creek at about 10 am, and exit the island just South of Red Bays at about 2 p.m. today. Residents in North Andros along this path will experience a brief calm and are advised not to venture outdoors during this period.

Maximum sustained winds are near 85 mph with higher gusts. Little change in strength is expected through Sunday, and Iasias is forecast to remain a Hurricane during this time.

Storm surge of 3 to 5 feet above normal tide levels can be expected along coastal areas throughout The Bahamas.

Localised Flooding is expected as Isaias is forecast to produce rainfall amounts of 4 to 8 inches.

Small crafts in The Bahamas in the warning areas should seek safe Harbour and remain in Port due to dangerous swells ahead, during and after the passage of Isaias. Residents are urged to follow all advice given in alert messages.