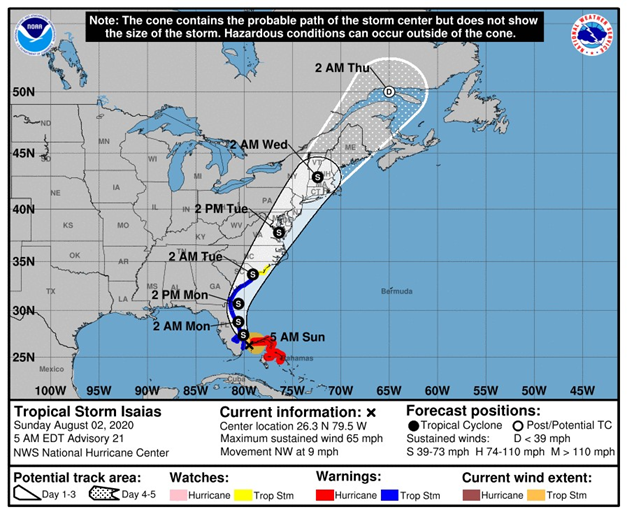 Isaias continues to bring heavy rainfall and gusty winds to The Northwest Bahamas.

Hurricane warning remains in effect for the islands of Grand Bahama, Bimini and the Berry Islands including the neighboring Cays.

At 6 am edt, the center of Isaias near latitude 26.3 degrees North and longitude 79.5 degrees West or about 40 miles West-Soutwest or Freeport Grand Bahama and 160 miles Northwest of New Providence.

Isaias is moving towards the Northwest near 9 mph, and a general Northwestward motion is expected today, followed by a North-Northwestward motion by tonight. A turn towards the North-Northeast is anticipated on Monday and Tuesday with an increase in forward seed. On the forecast track, the center of Isaias will move out of THe Bahamas before noon today.

Maximum sustained winds are near 65 pmh with higher gusts.

Little changes in the strength is expected during the next couple of days.

Tropical storm force winds extend outwards up to 115 miles from the center.

Bimini and Grand Bahama are experiencing Tropical Storm conditions which will gradually decrease throughout the morning and dissipate by this afternoon.

Localized flooding is expected as Isaias is forecast to produce rainfall amounts of 4 to 8 inches.

Small craft in The Bahamas in the warning areas should seek safe Harbour and remain in Port due to dangerous swells ahead, during and after the passage of Isaias.