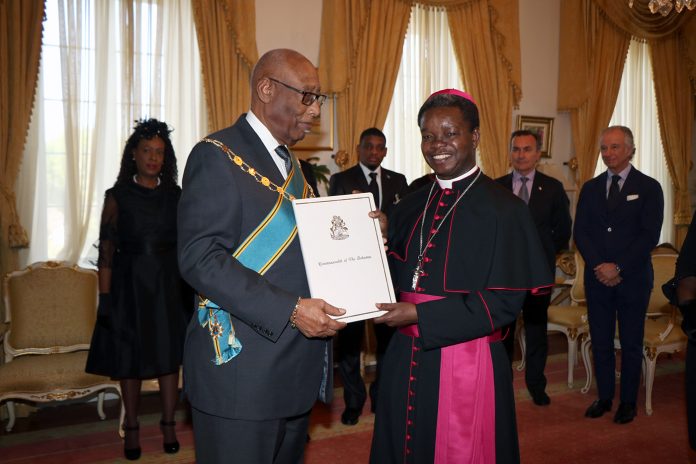 The newly appointed Apostolic Nuncio, His Excellency Archbishop Fortunatus Nwachukwu, presented Letters of Credence to the Governor General, the Most Hon. Cornelius A. Smith, accrediting him as Apostolic Nuncio, Holy See-Vatican Ambassador to the Commonwealth of The Bahamas. The ceremony was held at Government House, February 5, 2020.  Most Reverend Patrick Pinder, Catholic Archbishop of Nassau; Fr. Kendrick Forbes, Vicar General; His Excellency Basil Barnett, Non- Resident Ambassador to the Holy See and Fr. Luciano Labanca, Nunciature Attache/Deputy Head of Mission, were present for the event. The papal ambassador expressed wishes for wellbeing, happiness, peace and prosperity on behalf of Pope Francis to Her Majesty, Queen Elizabeth II, to the Governor General, the government and people of The Bahamas.

He pledged his commitment to promote the “greater good” of the people of The Bahamas in mutual cooperation and to strengthen the existing relations between the Holy See and this country. Furthermore, he noted that The Bahamas and the Holy See share cordial relations at the bilateral and multilateral levels and thanked the Governor General for the appointment of Non-Resident Ambassador to the Holy See, His Excellency Basil Walter Barnett, who presented his credentials to the Pope in 2018. The Nuncio recalled the commitment of Pope Francis to make the world “a better place.”

“The Pope’s warm personality and approach have brought a freshness to the way the Holy See and the entire Catholic Church carry out their mission, especially with regard to the defense of the dignity of the human person, at every stage of human life, notwithstanding the person’s particular socio-economic or other circumstances.” He underscored the intention of Catholic institutions to “always” work in partnership with the government for the benefit of all. “They try to cooperate with the public institutions in implementing projects of development in order to improve the living standard of the people, especially of the less privileged persons.” In response, the Governor General welcomed the Nuncio to The Bahamas and congratulated him on his appointment.

He highlighted the “warm” relationship with the Holy See, conveyed the country’s commitment to maintaining cordial relations both bilaterally and multilaterally, and assured the Nuncio of his support in his mission to strengthen the relations between The Bahamas and the Holy See. The Governor General acknowledged that the Archdiocese of the Bahamas is celebrating 130 years of Catholic education from which many of the country’s leaders, past and present, have emerged and made contributions to the development and advancement of the nation.

“We are also proud of our Olympians and athletes, many of whom got their training in Catholic schools in The Bahamas and then went on to make The Bahamas a household name in the world of sports. “These great achievements could not have been done without the strong educational and vocational values provided by the Catholic Church,” said the Governor General.