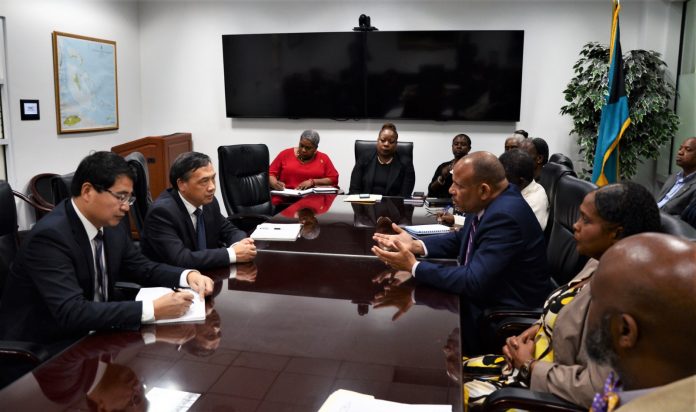 Ambassador of the People’s Republic of China to The Bahamas, His Excellency Huang Qinguo made a courtesy call on the Minister of Health, the Hon. Dr. Duane Sands at the Ministry of Health’s Meeting Street headquarters to discuss the 2019 Corona Virus in China on February 7th. The Chinese Ambassador informed Minister Sands of measures taken to prevent and control the spread of the virus in and outside of China. The Ambassador noted that since the outbreak, the measures taken by the Chinese Government exceeded the recommended measures by the World Health Organization in an open and transparent manner.

It was on January 23rd when International Reports confirmed that the number of Novel Coronavirus cases in Wuhan City resulted in a lock down of the movement of persons in and out of that area. Persons who were permitted to travel were screened and those with fever were prevented from travelling. All confirmed cases are being treated and all suspected cases are being quarantined. Stricter measures were taken at the Customs Borders to prevent persons from leaving the borders.   The Chinese Diplomat revealed that the Foreign Minister of China sent a Task Force to Wuhan City to monitor the situation including the well being of Bahamian students who reside there. The Chinese Ambassador further noted the 160 Bahamians residing in China including the five living in Wuhan City are being monitored by Officials of the Chinese and the Bahamian Embassies. They are all encouraged to remain at home to prevent the risk of infection.

The Chinese Ambassador also recognized that the Novel Coronavirus outbreak in China is improving despite the increase in new cases, as the numbers of suspected cases are decreasing. He said the recovery process is also improving and the Chinese Government is confident that with warm weather, the number of cases will further decreased.   Ambassador Qinguo noted that the Border Control and Quarantine measures taken by The Bahamas are stricter than other countries, and hoped that with health improvements in China, the period of time for quarantine will move from 20 to 14 days. Minister Sands thanked the Ambassador for the collaborative meeting and noted that these measures were taken due, in part, to the condition in the country following Hurricane orian, and that the health prevention messaging speaks to the 2019 Corona Virus and not the Chinese People.

The Minister also informed that the concerns raised, especially with regard to the period of time for the quarantine, will be discussed with his Cabinet colleagues. The Health Minister commended the Government of the People’s Republic of China for the efforts taken to prevent and control the epidemic, and committed to continue the collaborative partnership and support to prevent the spread of the 2019 Corona Virus.