Home News Contract Signing for Electrification of Defence Force Base 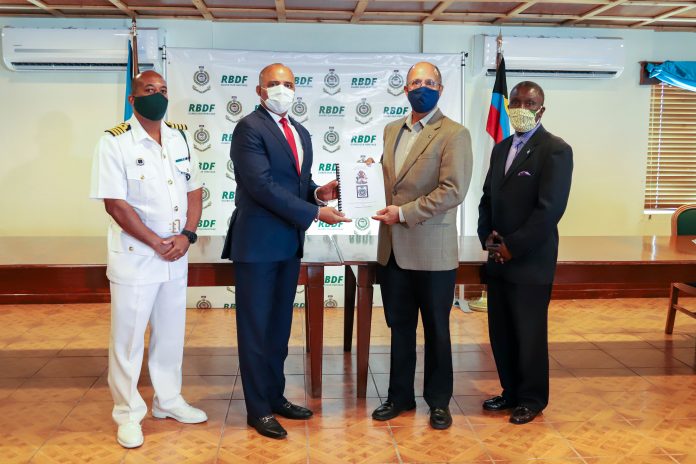 A contract signing ceremony for the electrification of the R.B.D.F base as part of its ongoing Sandy Bottom Project to modernize the force was held on Wednesday, May 13 at HMBS Coral Harbour. Signing the official contracts on behalf of the Bahamas Government was Mr. Marco Rolle, Permanent Secretary in the Ministry of National Security and the President of Flameless Electrical Contracting Limited (FEC Ltd.), Mr. Quentin Knowles.

Mr. Knowles expressed his gratitude on being able to see the entire project through to its full fruition. He noted that he was part of the project during its initial planning, which focused on providing shore power for the vessels. The project has since expanded to include power distribution for the entire infrastructure of the base.

“I’m truly excited to be a part of this project and believe it will substantially help the Royal Bahamas Defence Force reinforce their vision of becoming a model of excellence in guarding our heritage,” said Mr. Knowles. “I’m proud to say, as a fully Bahamian team, we shall provide world class electrical installation that will service the electrical needs of the Defence Force for years and indeed decades to come. Minister of National Security, the Hon. Marvin Dames commended the company for their continued efficiency, and said that electrification of the Coral Harbour Base remains a priority. As this project serves as a positive resource for the vessels procured under the Sandy Bottom project, it also enhances the modern development of the Base.

The Royal Bahamas Defence Force appreciates that although time, technologies and environments will change, its mandate remains – Guard Our Heritage. (For further information please contact the RBDF Public Relations Section or visit our website: http://www.rbdf.gov.bs , follow us on Facebook , and view our Youtube channel)