Home News Dialogue between the European Union and The Bahamas on Article 8 of... 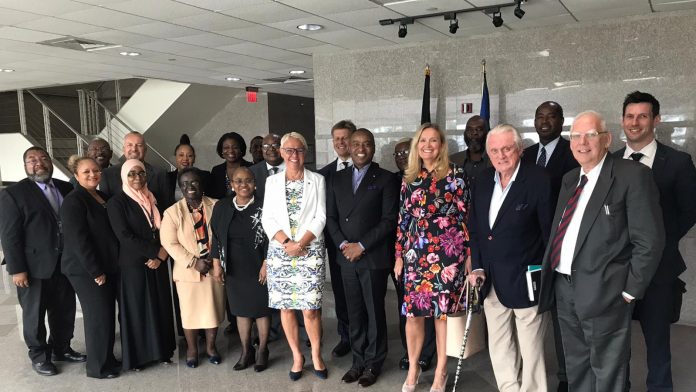 The Bahamas and European Union have concluded their 2020 political dialogue with assurances from both sides of good relations, and a commitment to working together to address common problems. The high-level meeting came in the context of the ongoing negotiations to settle on a successor to the expiring Cotonou Agreement, which underpins the relationship between the EU and The Bahamas. Officials from both sides met on February 28, 2020 at the Ministry of Foreign Affairs in Nassau to discuss the political dimensions of relations, as required under Article 8 of the Cotonou Agreement.

The packed agenda covered cooperation in the international arena, human rights, environmental issues and climate change, anti-money laundering, blacklisting and the sustainable development goals. The Bahamas also provided the EU an update on Hurricane Dorian recovery efforts and accession to the World Trade Organization. Minister Henfield said, “Having had a fruitful and candid dialogue, I am very optimistic about The Bahamas’ future relationship with the EU. Having established an Embassy in Brussels will allow us to deepen our ties and work towards mutually agreed outcomes.” Minister Henfield also thanked the EU for their rapid response and support in the aftermath of Hurricane Dorian. He expressed appreciation to the EU Ambassador for her commitment and collaboration during her tenure as the EU High Representative to The Bahamas.

EU Ambassador Wasilewska said “These meetings are important to get a direct pulse of the relationship, and on behalf of the representatives of the EU member states, I am happily reporting that the reading coming out of today’s talks is ‘we’re strong’. The Bahamas has had a rough past year due to Dorian but that has not shaken commitments and it’s that resilience that will drive our approach to tackle some of the problems of our times. It’s also my last meeting before my tour ends so it’s a great opportunity to say thanks to my Bahamian partners.”

The Cotonou Agreement is the overarching framework for EU relations with African, Caribbean and Pacific (ACP) countries and the most comprehensive partnership agreement between developing countries and the EU. The Agreement seeks to promote and expedite the economic, cultural and social development of the ACP States, with a view to contributing to peace and security and to promoting a stable and democratic political environment.

Article 8 – the Political Dialogue, calls for the Parties to regularly engage in a comprehensive, balanced and deep political dialogue leading to commitments on both sides. The dialogue also seeks to facilitate consultations and strengthen cooperation between the Parties within international fora as well as promote and sustain a system of effective multilateralism. The Minister of Foreign Affairs, the Hon. Darren Henfield chaired the meeting. Present from the EU, were Amb. Malgorzata Wasilewska, Head of the EU Delegation based in Jamaica, Mr. Fredrik Ekfeldt of the EU office, the Ambassadors of the Czech Republic and Sweden and the Deputy Ambassador of Ireland accredited to The Bahamas, as well as representatives of Portugal and Belgium.