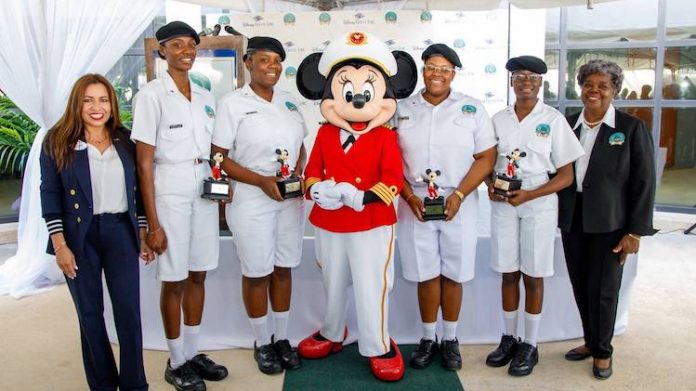 During a special award ceremony held this morning at the LJM Maritime Academy in Nassau, Disney Cruise Line awarded scholarships to four female cadets to attend the maritime academy. The scholarships, one for each of the ships in the Disney Cruise Line fleet, include two years of study at LJM Maritime Academy and one year of service aboard a Disney ship. “We’re proud to have women in prominent leadership roles across our fleet,” said Yvonne Sweeney, Disney Cruise Line vice president of human resources. “Disney Cruise Line is committed to inspiring future female leaders in the maritime industry and this scholarship program is one of many ways we’re delivering on this. It’s truly an honor to recognize these talented young women and make their dreams a reality.” The following cadets were selected based on the demonstration of academic excellence along with their aspirations to become ship captains and shipboard leaders:

Christina Adderley grew up watching the cruise ships in the harbor on Eleuthera and was enchanted with the water. She hopes to work as a marine engineer onboard. Adderley says this scholarship has “catapulted a little island girl into the city … and beyond,” and her dreams are now within reach.

Emily Bain became interested in the maritime industry as a teenager. She looks forward to a career as an officer in the bridge room because she says it is “a portal into the next dimension where critical thinking and the impossible take place.”

Paula Greene has always been eager to explore the high seas. She hopes to work in the deck department as a marine pilot. Greene says one of the things she most looks forward to in her career is experiencing the stories and adventures that take place on a ship – particularly the smiles of happy families and children.

Antoinique Lightbourn’s fascination with the sea grew from her childhood boating trips with her father. She hopes to work in the deck department where she can contribute to the navigational safety and integrity of a ship. Since 2014, the LJM Maritime Academy has worked to provide local professional-level training to future maritime professionals in The Bahamas. “Our purpose is to help cadets create meaningful paths in the maritime industry, shaping the future of both the industry, and our country,” said Dr. Brenda Cleare, president of the LJM Maritime Academy. “We’re grateful to Disney for their continued support of the academy and for providing scholarships to these remarkable young women. We’re so proud of these cadets and are excited to see where the future takes them.” This scholarship program is part of a larger collection of initiatives Disney Cruise Line has implemented to inspire future maritime professionals and support communities across The Bahamas. Disney Cruise Line has enjoyed an ongoing relationship with LJM Maritime Academy for many years. Last summer, Disney Cruise Line sponsored the academy’s camp program giving more than 40 Bahamian students the chance to learn more about the local and global maritime industry and gain a better understanding of its career opportunities.

Disney has supported communities in The Bahamas in a variety of ways for more than 20 years. In addition to crew members regularly hosting reading programs in The Bahamas, Disney Cruise Line annually brings Disney characters and gifts to children in Nassau and the Abaco Islands to help celebrate the holiday season. Disney Cruise Line also recently began supporting the community in Eleuthera, providing funding for holiday events, cultural activities, an after-school program, college visits to Florida by high school students from Eleuthera and more.

Recently, Disney Cruise Line announced that it has also entered into an agreement with the Access Accelerator Small Business Development Centre and the Eleuthera Chamber of Commerce to prepare startups and small businesses for participation in development projects underway in Central and South Eleuthera, including Disney’s Lighthouse Point project. Disney is providing more than $1 million to fund the initiative over three years. Since its maiden voyage in 1998, Disney Cruise Line has introduced countless families to the beauty and spirit of The Bahamas. At the same time, the company has provided significant economic impact while demonstrating a strong commitment to the environment and the community. Today, 75 percent of the cruises offered by Disney Cruise Line have at least one stop in The Bahamas. It is estimated that Disney Cruise Line operations contribute more than $70 million toward the Bahamas gross domestic product annually.

Death of Bahamian National in Canada

Minister of Education’s Audio Address – Update on School Closures and...

The Cuban Ambassador Paid a Courtesy Call on the Attorney General

Minister of Education’s Audio Address – Update on School Closures and...

The Cuban Ambassador Paid a Courtesy Call on the Attorney General

Death of Bahamian National in Canada