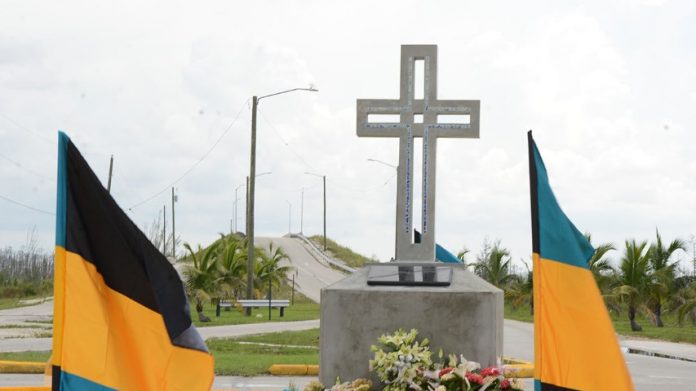 Deputy Prime Minister and Min. of Finance, the Hon. Peter Turnquest said the pain caused by the loss of lives during Hurricane Dorian remains personal for him. “Many who died were my friends,” said Min. Turnquest. “Some who are still missing, I know personally. I’ve visited and shared with those persons, in homes now shattered and destroyed. Monuments like this are erected to help ensure that we never forget what happened September 1 st , 2019.”

The Minister’s remarks came on Tuesday, July 14, 2020, during the unveiling of a monument at the Sir Jack Hayward Bridge, which leads to East Grand Bahama, to serve as a memorial to the lives lost in East Grand Bahama during Hurricane Dorian in September of 2019.

“On behalf of the government, I commend the Grand Bahama Port Authority and its partners for this kind gesture,” said Min.Turnquest. “This occasion pays tribute to those who died as a result of Hurricane Dorian. It reminds us not only of the loss, but also of the tremendous effort and courage the surviving families and friends have had to bear, as they carry on and rebuild their lives and properties.

“We want them to know that they have not been forgotten. Also, their strength is symbolized by this monument. This monument will highlight our resilience and determined drive to carry on for those who did not make it. “

The D.P.M noted that since the passing of the historic hurricane,the Government of the Bahamas has taken measures and steps and learned lessons from the experience to strengthen institutions in preparation for future storms, which the country must assume will come. He noted that there has been the legislation of mandatory evacuations, hardening of the island’s sea defenses with the completion of the Smith’s Point Seawall and the Fishing Hole Causeway, with more such investments to come in the future in West and East Grand Bahama.

He added that building codes that help to protect people and property during storms are being drafted; NEMA has been strengthened in its leadership and management of disaster preparation and response; the Disaster Reconstruction Authority has been formed and is presently assisting Bahamians with rebuilding efforts. “Shelters that have been damaged during Hurricane Dorian are being repaired and new ones identified,” said Minister Turnquest. “The Rand Memorial Hospital is being completed renovated and renewed to almost a new facility, with expanded bed capacity, in preparation for a new facility that will eventually be built as things return to normal.

“The government understands that there is no quick fix to do it right, but we understand the urgency. “The unveiling of this monument cements the fact that our recovery demands a unified approach. We are in this together and we will get through this together.” The Deputy Prime Minister urged the Grand Bahama Port Authority and its partners to redouble their efforts in the cleanup of Grand Bahama, noting that
there are still a number of areas that remain filled with debris, which is hampering the rebuilding efforts. He said that the completion of the cleanup project will go a long way towards the recovery of the island of Grand Bahama. The Deputy Prime Minister also pointed out the urgent need for a new airport in Grand Bahama. He noted that the temporary facility is adequate, but not ideal.

“Of course, we all have to do our part to restart the economy and assist residents to return and to start new businesses on the island,” said Minister Turnquest. “In this regard, I want to commend the Grand Bahama Port Authority on its RISE Program and for partnering with the Small Business Development Center to assist entrepreneurs throughout the length of this island. “I want to thank the Port Authority for the humanitarian assistance to the residents on the island, through their Foundation.” Minister Turnquest pointed out that the monument will not just represent the lives lost during Hurricane Dorian, but will also serve as a tribute to all of the frontline workers, First Responders and even private citizens who became heroes, having used jet skis, boats and other means to save the lives of many Grand Bahamians during Dorian.

“This Memorial is for you too, as we celebrate and remember your courageous acts of kindness. Yet, it is another forceful reminder that we are indeed a village and together we cannot and must not fear. “While this Memorial is located here in Grand Bahama, let me say to the people in Abaco that it is difficult and near impossible not to link Abaco to this moment. The Grand Bahama and Abaco ties, particularly in East Grand Bahama are strong. “This Monument celebrates your loved ones too.” The Deputy prime Minister told those in attendance that there are plans to construct a Memorial park in East End (proper), to have a place where family members can go and reflect on the lives of those who were lost in the historic and terrible storm called Hurricane Dorian.