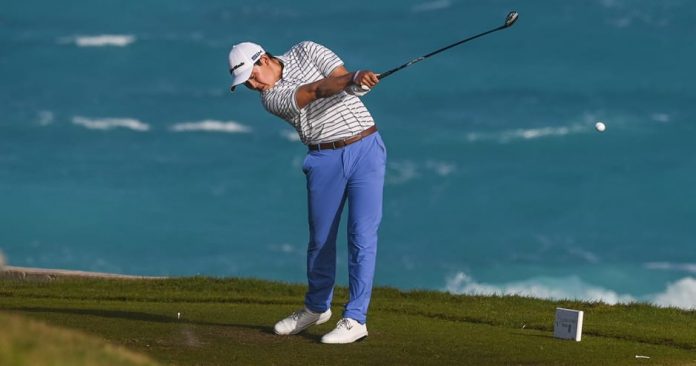 After a 5-under 67 on Sunday led to a T2 position entering the second round, Dylan Wu carded a front-nine 31 and an eventual 66 on Monday to open up a seven-stroke lead on the field. At 11-under, Wu leads George Cunningham and John Oda at 4-under and three players at 3-under. Play was suspended due to darkness at 5:48 p.m. with five groups remaining on the course at The Bahamas Great Exuma Classic at Sandals Emerald Bay.

While Wu’s front-nine 31 is the low nine of the tournament so far, his round almost got off to a much different start. The 23-year-old credited a grind-it-out par on the first hole to jumpstarting his day.

“On No. 1, that was a really good par,” said Wu. “It’s probably my least favorite tee shot because I hit the ball left to right, and the wind is straight off the left. In the practice round my first two tee shots were in the water. Today I was in the rough and somehow hit it left into the hazard on my second shot. I found it in the hazard, but I could only advance it about 20 yards into a waste bunker. Then I had a 40-yard shot and I hit it to nine feet and made the putt for par.”

Wu followed up his virtuoso par with a chip-in birdie at the second and added birdies at the fourth and eighth holes before an eagle at the par-5 ninth. After bogeys at the 10th and 12th holes, the Northwestern alum birdied three straight at Nos. 14-16 to reach 11-under.

“After I made eagle on nine, I knew 10-13 going straight into the wind were going to be tough,” said Wu. “I was actually pretty happy to play those at 2-over. It could have been worse. I made par on 13 and then birdied the next three.”

Monday’s conditions included 15-20 miles per hour wind with gusts up to 30 miles per hour. Similar to the first round, the scoring average hovered around 75 before eventually landing at 74.969. The scoring average of almost three strokes over par would have been the toughest on Tour last season by almost a full stroke. Wu leads only 10 players under par and the cut line is currently projected to fall at 5-over.

“I typically hit the ball pretty low,” said Wu. “This offseason I actually tried to hit the ball higher, but coming in here, I threw that out the window. You can’t prepare to play in wind like this. I mean I played at Northwestern in Chicago, so I know how to keep the ball low, but this is different. Basically 10-14 you keep the ball low and ‘swing easy in the breezy.’ I think Tom Watson says that.”

Wu was a rookie on the Korn Ferry Tour in 2019, but only made 13 starts after beginning the season with low conditional status. He got into the Lincoln Land Championship presented by LRS as an alternate and proceeded to finish runner-up after losing to Xinjun Zhang in a playoff. That finish set him up with starts for the remainder of the season and allowed him to retain his Korn Ferry Tour card in 2020.