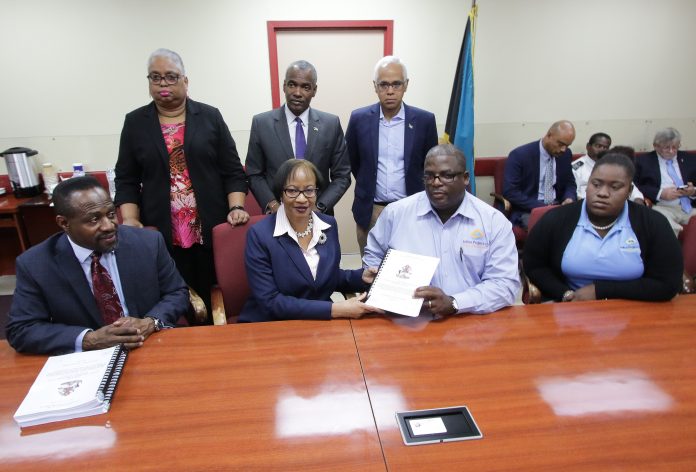 The government has entered into a $3.8 million contract with Inline Project Company Limited to renovate the fire station at Lynden Pindling International Airport. A contract signing ceremony was held at the Ministry of Public Works, January 30, 2020.  Minister of Public Works, the Hon. Desmond Bannister said that the station was badly damaged during the passing of Hurricane Matthew in 2016. “Due to the damage and destruction caused by hurricane Matthew throughout The Bahamas in October 2016, it is critical that repairs be made to the Fire Services building,” said Minister Bannister. “The construction repairs will include structural, mechanical and electrical works.”

The fire station provides firefighting protection and services for the airport facility and aircraft using the airport. The Minister said that it plays an important role at the airport: “The Fire Services building is a critical factor in Lynden Pindling International Airport’s maintaining its rating as an international airport servicing international air traffic.” Minister of Tourism, the Hon. Dionisio D’Aguilar was also in attendance. He said that he welcomed the news of renovations to the station, noting it would also be outfitted with new fire trucks.

“I am delighted to see the signing of this contract. Firemen at the airport have been living in trailers since the hurricane,” said Minister D’Aguilar. “The environment will be vastly improved. In addition, the government has committed to purchasing 11 new fire trucks for the station.” Scope of work for the renovation of the station will comprise total refurbishment of a gross floor area of approximately 7,242 square feet of the existing station inclusive of mechanical and electrical engineering scopes and external works.