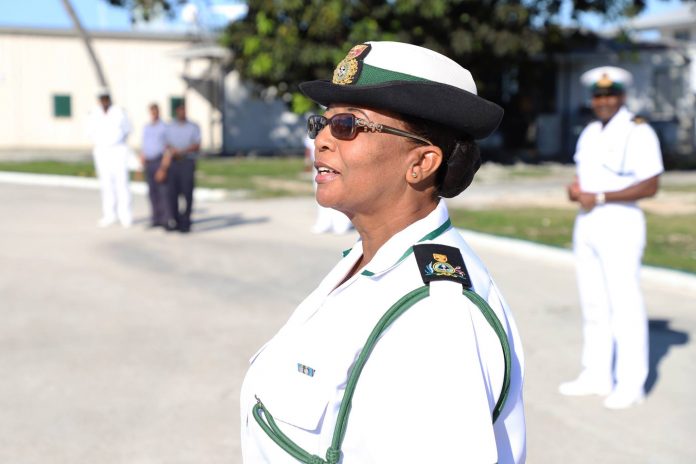 (RBDF): Have you ever met someone so calm and quiet that you believe the term, “It looks like they can’t hurt a fly”, but in an instant they can transform from Dr. Jekyll to Ms. Hyde if they had to? Well I experienced that for myself while on parade one morning. As the Headquarters Department was being marched off into the driveway where the Commander Defence Force vehicle is usually parked, I made a blunder when approaching the vehicle, with no way to manoeuver. I decided to bring the parade to an abrupt halt. I paid the price with a good tongue lashing from ‘Ms. Hyde”. I took it like a man, and I’m happy to report that afterwards she and I became great friends. This is the reason I chose to interview her; my good comrade and friend, Force Chief Petty Officer (Retired) Idamae “Fergie” Ferguson. Sitting down recently with her I got to know her a little better, from her humble beginning, to the pinnacle of her career, up to her retirement. Force Chief Petty Officer (FCPO) Idamae Ferguson was born on the quiet and beautiful settlement of Johnny Hill, Crooked Island, to her parents Linkwood and Clayomi Ferguson.

Their motto was ‘Train up a child in the way they should go so when they get old, they will not depart from it’. She explained how at a tender age of nine she taught Sunday school, as it was a requirement while attending church every Sunday. When FCPO Ferguson wasn’t teaching, she and her siblings went boating with their father and were taught how to steer a boat, swim and dive. He also taught her how to drive a stick shift vehicle and change a flat tire. He always believed in teaching his children how to be independent as a result of being in the US Army.

In 1985, motivated by her uncle Mr. Cleveland Walkine (deceased), a young Idamae Ferguson entered the gates of Coral Harbour; a history-making event that would see the first entry of women to join the Royal Bahamas Defence Force. The mother of one son, D’Keino Saunders, FCPO Ferguson decided to join an all-male organization. “I was not only looking for a job but I wanted to serve my country”, said Ferguson. I then asked her to describe herself in two words…. “Hardworking and humble” she stated. “I believe in giving my best while staying humble”. As we continued our conversation, I asked if there is one word other persons would use to describe her, what would it be? Her response, “Compassionate; because I’ve learned to listen and learn to help others along the way”.

During basic training, most recruits have a particular instructor who stands out. In her case, the now retired Force Chief had several. She lists Force Chief Petty Officers Mario Bain (deceased), Ralph McKinney, Luke Bethel and the now Captain Michael Simmons, who all encouraged her, leaning heavily towards Mario Bain as having the greatest influence. Following New Entry training, most Marines pick up an alias or two, I said besides “Fergie” what other nicknames was given to you? With a laugh, “I really have to?” she asked. “Well it was ‘Fealy’” ( Deadhead), she explained. “Fealy” from Demeritte’s Funeral Home. It was at that time there were a lot of social activities but it just wasn’t my thing” she said. Later in her career, the alias “Margaret Thatcher” was bestowed on her. Throughout her career, Warrant Officer Ferguson had various posts. Various departments served in included: Training, Communications/Operations, Supplies, Headquarters (Accounts) and HMBS Nassau where she was assigned duties of Administrator and Coxswain. HMBS Nassau was her love, because she bonded with her crew, counselled them as needed, gave advice and assisted them in any way she was able to.

To put the icing on the cake, she has a lot of ‘firsts’. She was a part of the first entry, the first female Chief Petty Officer, the first female Warrant Officer, the first female Coxswain and the first Certified Female Instructor. While serving on the force, she educated herself by attending night classes at Success Training College, where she attained an Associate Degree in Accounting Management. She also achieved a diploma in Executive Administrative Assistant and Administrative Specialist at Fort Jackson, Columbia, South Carolina. Although she has retired, she still sets goals, and one of them is to inspire people as some members of the Defence Force has inspired her. She mentioned Senior Commander Gregory Brown, Commander Sonia Miller and Senior Lieutenant Elvis Bullard, just to name a few.

After retiring on January 30th 2019, she became a member of the Royal Bahamas Defence Force Veterans’ Association. She still continues to assist especially the young women of our nation. She serves as an Elder at her local church, Deliverance Ministries, where she is also active in the Prayer Ministry. When it comes down to relaxing there’s one thing she loves to do with her favorite pastime; fishing. Force Chief Ferguson says she loves when the fish takes off with her line – a feeling like no other.

My final question to her was what advice she would give to serving marines? She boldly said, “PUT GOD FIRST, trust and depend on Him and He will see you through. Seek ye first the Kingdom of God and his righteousness, and all these things shall be added unto you”. She
continued by saying, “Find your passion; whatever you like, do it. Educate yourself. Make yourself more valuable. Do not focus on negativity or allow negativity to become your environment. You are serving a great organization. Value the rules and regulations because what you value, you will respect. And what you respect, you will not compromise”. She continued, “Create a positive environment and you’ll see the difference it makes”. She stressed the importance of always trying to help someone. “We’re there to do a job but it’s also about helping others along the way and striving for excellence. Every day you get up will not be the best day, but you need to encourage yourself”. She shared that there were days she had to talk to herself and tell herself that she can do all things through CHRIST WHO STRENGHTENS her. As she encouraged herself, the day wasn’t as bad as it seemed. She encouraged others to find friends who are going to encouragement and
motivate them.

Her final advice: “Failure is not an option and you only fail when you give up. Do not give up! Keep trying until you succeed. Continue to push and things will eventually work out. There is a saying that goes ‘tough times never last but tough people do’. You’re special. GOD made us all for a purpose. You are more than a conqueror in Christ Jesus!” As I ended the interview, retired Force Chief Petty Officer Idamae Ferguson closed with a Benediction Prayer for the Marines:
The Lord bless you and keep you;
The Lord make his face to shine upon you
And be gracious to you;
The Lord lift up his countenance upon you
And give you peace.