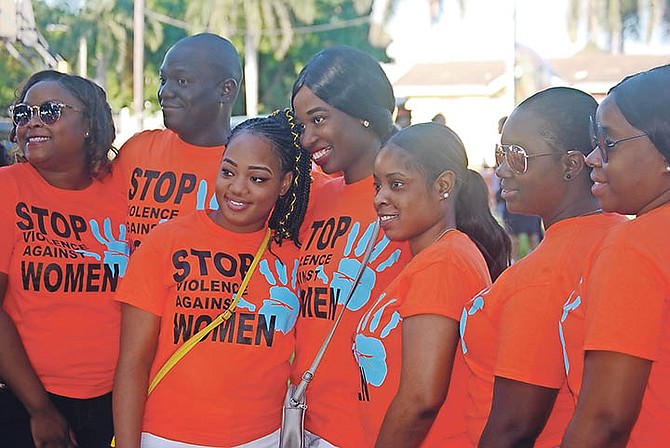 A global problem, affecting women remains on the doorsteps of our country, and is said to be on the rise. Gender-based violence is now reaching alarming figures with local civil organizations, and women’s groups calling for action, and more to be done at various levels.

Gender-based violence remains a prevalent issue in societies around the world. In the Bahamas, statistics are showing an upswing in abuse. Over the past seven to eight months there were 126 new cases. Member of the Women’s Advisory Council and National Chairperson for the Zonta Advocacy committee, Marissa Mason-Smith says that

“This is alarming because in past years, this number has tripled. There is great concern for gender-based violence in our country, as people are being affected in their personal lives as well as in their homes.”

Mason-Smith says that she feels the pandemic has contributed to the escalation in cases.

“In our communities we are seeing more and more violence taking place. As a result of the pandemic, loss of income there are a lot of challenges being faced by families today.

“We have also seen now that in most recent times, the murders that are taking place, most recently, we have had a mother and daughter who were killed we’ve had children killed we’ve had men killed. So, gender-based violence does not just focus on women but it focuses on people in general” she said.

With such a wide impact, the questions facing local advocacy groups are, “how to resolve conflict?” and “To what degree can help be provided?”.

“During the next 16 days of activism, as declared by the United Nations, the Zonta Club of the Bahamas will be hosting several initiatives” she said.

“And so, we are highlighting the need to say no to violence in all of its forms. We are providing education opportunities, job readiness programs for women who are unemployable and unemployed and giving them the necessary skills.”

Mason-Smith recognizes that while skills and training are necessary, there is also the need for tighter laws to help curb gender-based violence.

“A resolution was signed by NGO’s saying that we need to have stiffer laws and greater penalties for perpetrators, and we started the work and at this point, due to the Covid-19 pandemic, we have not been able to escalate that work. But it is actively being pursued.

“By early next year we should have some draft and the bill should be presented to parliament. We do believe that we have enough evidence and support to demonstrate why we need to have stiffer penalties and our laws need to be strengthened.”

With legislation still pending, Mason-Smith says that community education will pump up this year with a special focus on Nassau village, the site of several gender based violent activities.

“We are going to be doing the tying of the bows, first and foremost on the corner of Nassau Village as well as through the community which highlights that we say no to violence in all its forms. Again, we are offering training programs for the women in the community.

“We are also going to be having several town hall meetings with the youth, with the church, with women’s health issues because we’ve also realized that this pandemic has affected women’s health.”