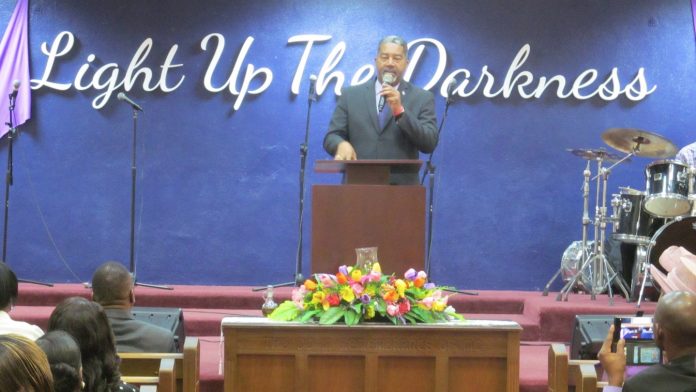 Gender equity and equality results in greater benefits for all – men, women, boys and girls, Minister of Social Services and Urban Development, the Hon. Frankie A. Campbell, said Sunday. Addressing the annual Church Service commemorating the global observance of International Women’s Day (Sunday, March 8) held at Bethany Assembly, Churchill Subdivision, Soldier Road, Minister Campbell said global, regional and local economies, families and communities thrive even better when gender equity and equality exists. Sunday’s Church Service was attended by females representing a number of the more than 200 non-governmental organizations (NGOs) that are registered with the Department of Gender and Family Affairs, Ministry of Social Services and Urban Development, and was one of several events commemorating International Women’s Day that Minister Campbell attended. The service was also attended by representatives of the National Women’s Advisory Council (N-WAC), and was a collaborative effort between the Ministry of Social Services and Urban Development; its Department of Gender and Family Affairs, N-WAC, the Caribbean Institute for Women in Leadership (CIWIL), Women United and Zonta Bahamas.

“This year as we celebrate International Women’s Day, we are also celebrating 25 years since the implementation of the Beijing Declaration and Platform of Action which focused on twelve areas. Today we are focusing primarily on the social, economic and political empowerment of our women,” Minister Campbell told his audience. “When talk about political empowerment, sometimes us men of colour like to walk around with our chests stuck out because of our ability to secure ‘One man, One Vote’ for ourselves that resulted in us having majority rule. Many of us act as if we are ignorant to the fact that, had it not been for the involvement and participation of the women, we probably would not have gotten that far at the time we did. The women were there, supporting in every which way they could, making equal sacrifices, and so the women helped to pave the way for us but when we look around the table, the women are not present. The women had our backs then, men I say that now is the time for us to have their backs.” Minister Campbell said women have shown a tremendous propensity and capability in handling finances and have played and continue to play key roles in the successful management of finances at the family and corporate levels. He said when women share in the wealth and/or participate in the national economies of countries, society, entire families, and the communities in which they live prosper.

“When the women handle the money there is always a little something there and so it is only fitting to believe that if more women have a say in the national economy, there is a likelihood that there will always be a little something there; that there is a little something extra in the kitty. It is time that we pay it back.” Minister Campbell paid homage to the stalwarts of the Women’s Suffrage Movement in The Bahamas and to those who have made their mark in politics. Sunday, he singled out Pastor S. Ali McIntosh for her role as Leader of The Bahamas Constitutional Party. “In talking to Ali I realized that for her, it was never about trying to win an election or trying to become the Prime Minister, but that it was more about ensuring to the extent that she was able to, that women are exposed to leadership; that women are given the kind of tools and equipment that would prepare them to step out and offer themselves as political leaders.