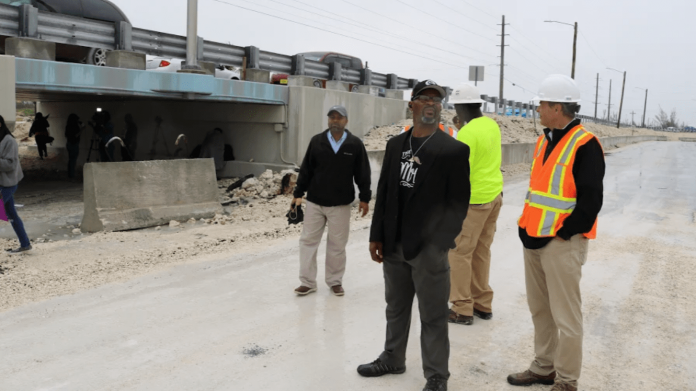 The government is taking progressive steps to address the poor road conditions on the new overpass bridge and on the service road at the Fishing Hole Road that leads from Freeport into West Grand Bahama. During a press conference at the bridge on Saturday, February 15, 2020 Minister of State for Grand Bahama, Senator the Hon. Kwasi Thompson called the work being carried out on the service road and the bridge “the beginning of the end of the process.” “What has happened is that this bridge was finished before the storm in 2019,” explained Minister Thompson. “Unfortunately, the storm destroyed the ramps to this bridge.  Today, we can definitively say that work has begun to complete the process. “We know that the public has been very agitated to having this bridge completed, so we wanted to make it a point to come back to the public and ask them to be patient for a few more weeks, but work is being done now to bring some resolution and some relief for the people of Grand Bahama.”

Work crews were out at the bridge on Saturday morning working on the service road, in preparation for use on Monday morning.  Once the service road was ready over the weekend, the bridge was closed off, so that work on the repair of the road could begin. Deputy Prime Minister and Minister of Finance, the Hon. K. Peter Turnquest said that the problems at the bridge and on the service road had been a source of angst and inconvenience for West Grand Bahama in particular and for Grand Bahama on the whole during the periods when the bridge becomes inaccessible, therefore a hindrance for people to get to work. “We are very pleased to have reached at this point where we have a design and the contractors are on site to being this final phase,” said Minister Turnquest.

“We appreciate the patience of the Grand Bahama public as we go through the process of trying to find the correct solution. We have other capital works in Grand Bahama that need to be focused on and completed, so we want to make sure that this project is completed properly so that we won’t have to come back to this. “As I’ve said before, the Government of The Bahamas is committed to Grand Bahama. We are not going to leave Grand Bahama behind, and we will do what needs to be done to ensure that the services and the conveniences that the Grand Bahama public deserves are delivered as soon as possible.” Wolfgang Geiger President of ABC Construction in Freeport, Grand Bahama, and General Contractors for the bridge at Fishing Hole Road, told the media that the bridge was completed and set to officially open on September 21, 2019.  However, Category 5 Hurricane Dorian destroyed both ramps on both sides of the bridge. Storm surge removed most of the asphalt on the new bridge.

“All of the studies from scientists they never predicted 23 foot storm surge in this area,” said Geiger. “The highest was 10 or 11 feet. The bridge is 12 feet high, so theoretically, we shouldn’t have this situation, but nobody predicted the kind of storm we had in September 2019.” According to Geiger, it would take about six to eight weeks for the repairs on the bridge to be completed and reopened. Minister of State for Disaster Preparedness Management and Reconstruction, Iram Lewis, says that one of the long term goals of the Minnis Administration in such capital projects is to build resilience, particularly following Hurricane Dorian, and one of the ways to do that is to consider risk identification. He added that once risk has been identified, everything is done to reduce that risk.

“One of the risks we identified, especially for this structure was that washout was a reality,” explained Minister Lewis. “In order to mitigate against that and to reduce that risk and build resilience, the decision is to replace the asphalt approach ramp with reinforced concrete. That should stand up under much more stringent conditions that asphalt. “The design had been completed by the Ministry of Works. A change order has been issued to the contractor. So work has begun.” According to Mr. Lewis, Cabinet has approved $1M for the repairs to the ramp.