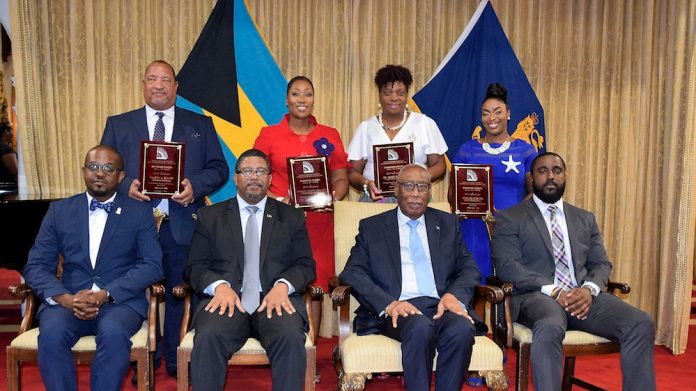 The Most Hon. Cornelius A. Smith, Governor General, received the 2019 Nassau Pan Hellenic Lifetime Achievement Award for his philanthropic contributions to The Bahamas at the 2018/2019 Bahamas Greek Hall of Fame Induction and Installation Ceremony. The award is the highest recognition given to a non-member of the Nassau, Bahamas Pan Hellenic Council.

The ceremony held Thursday, December 5, at Government House, Mount Fitzwilliam, was organized by the Bahamas Council of the National Pan-Hellenic Council, to bring recognition to outstanding Greek members and congratulate Bahamas Greek Hall of Fame inductees.

In his remarks, Deputy Prime Minister and Minister of Finance the Hon. Peter Turnquest said the Pan Hellenic Council has played a significant role in the development of The Bahamas. Along with the chapters, he said the Council has worked hard and given recognition to the plight of the poor, downtrodden, homeless, marginalized, and youth through mentorship and scholarship.

He described the occasion as a “fitting” time to recognize the contributions of community advocates, nation builders, mentors and trailblazers.

“Those of you who have been inducted into the Hall of Fame today, the Pan Hellenic Council and the country have been the benefactors of your service, talent and treasure,” said Mr. Turnquest.

Krysti Campbell was presented with the Distinguished Past Vice-President award.

An Installation ceremony was also held for the 2020/2022 Council Executives.

On February 4th, 1995, the Nassau, Bahamas Pan-Hellenic Council was officially chartered by the NPHC, becoming the first international council, outside of the United States of America to be chartered.

Min.of Education’s policy on homeschooling during the COVID-19 pandemic

Statement by the WSC on Abaco Contract signing

Statement by the WSC on Abaco Contract signing

Bahamas In Good Position To Benefit From Investment And The Multi...

Min.of Education’s policy on homeschooling during the COVID-19 pandemic