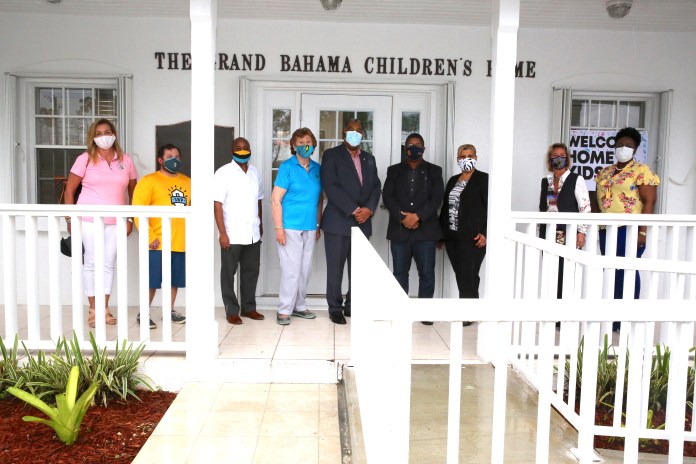 Inclement weather did not stop the much-anticipated arrival from Nassau of the 30 children of the G.B Children’s Home on Friday, October 16, for the official reopening of the Home. As promised, Min. of Social Services and Urban Development, the Hon. Frankie Campbell accompanied the youngsters from the nation’s capital to Freeport, along with other senior government officials and chaperones. The Grand Bahama Children’s Home had been damaged by Hurricane Dorian over a year ago, and the children were moved to home facilities in New Providence while the GB Home was being repaired. It was a happy day to see them return to their familiar surroundings.

Deputy Prime Minister Turnquest said it takes a village to raise a child, and the residents of Grand Bahama have lived up this saying over the years. With several boys as residents at the Home, he called on men to “step up” and find some time to spend with them. The load, he said, will not be heavy “if we all chip in.” Acknowledging the police officers present, he added that when he was a young man, the Police Force was continually active in Boy Scouts and it had a positive influence on those who attended. He then threw out a challenge for them to volunteer with the young boys at the Home. Minister Campbell said the government cannot do it alone and recognizes and appreciates the work done with partnerships such as the Grand Bahama Children’s Home. While in New Providence, the group was housed at the Ranfurly Home for Children, the Children’s Emergency Hostel, and Nazareth Centre. Following the remarks and ribbon cutting, there was an official tour of the facility.