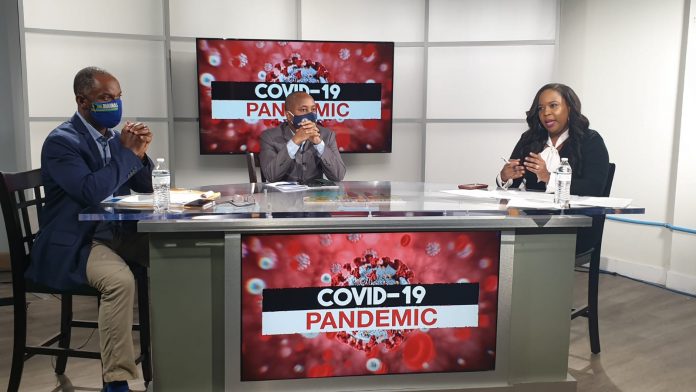 Grand Bahama island’s cabinet ministers addressed several issues during an interview carried live on ZNS on Friday. Deputy Prime Minister and Minister of Finance, the Hon. K. Peter Turnquest said the country has “suffered three calamities,” two hurricanes and the coronavirus pandemic, all events that have caused the government to allocate additional resources to those in need. The hurricanes and the pandemic have forced people to relocate as well as lose their jobs.  The 2020/2021 budget, he said, endeavours to prepare the country for recovery, expand social protection, and provide stable employment through various grants and programs.

To assist with this, VAT and duty-free exemptions have been extended to ease the burden for residents of Grand Bahama and Abaco.  The introduction of the VAT holiday, he said, will be held just before the opening of school in August, and is designed to encourage residents to shop at home as well as ease the financial burden residents are under. “It may not seem like much to some, but for those who have lost their jobs, it means something to them.” Like the Deputy Prime Minister, Minister of Agriculture and Marine Resources, the Hon. Michael Pintard joined the press briefing by Zoom and said there is a land clearing and land preparation exercise in place to assist farmers in Grand Bahama who need support with preparing their land for agricultural purposes: it is part of the national effort to move the country towards increased self-sufficiency in food production.

Minister of State for Disaster Preparedness, Management and Reconstruction, the Hon. Iram Lewis said there are approximately 170 workers of five local construction companies working on the Rand Memorial Hospital, although they have encountered some delays due to severe weather. They are, however, working constantly to produce quality work up to building code, as quickly as possible, with hurricane season starting June 1. Minister Lewis said in relation to hurricane preparations, they were able to perform a dry run with evacuation of residents from Sweeting’s Cay with Tropical Storm Arthur. The residents were successfully evacuated and bused to a hotel in Freeport within two hours. Fifteen contractors are set to begin work on schools to not only prepare them for the upcoming hurricane season, but also the new school year. Due to the pandemic and social distancing policies, it is no longer possible to use just the gyms as hurricane shelters — classrooms will also be utilized.

Hurricane repairs are continuing, and those who qualified for assistance are being paid in phases. He said the minimum is $2,500 up to $10,000. The Fishing Hole Road, he added, should be completed by Tuesday with the striping and reflectors in place.

Senator the Hon. J. Kwasi Thompson said it is important that Grand Bahama have an international airport, and with its being privately owned the government is currently in talks with Hutchison and the Grand Bahama Port Authority concerning change in ownership. It is the intention of the government to not only see that the airport is rebuilt, but in a way that is resilient; and it will assess the best place and how the airport should be rebuilt.