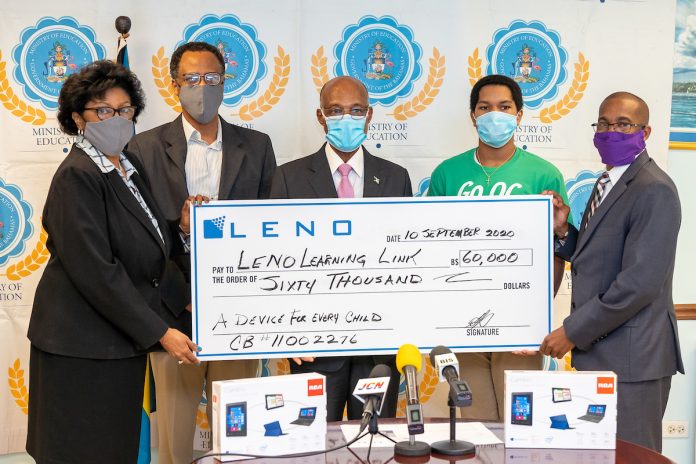 Calling it “a pressing need we can meet if we all pull together,” LENO founder and CEO Sean K Longley today pledged the financial services company’s commitment to lead a national effort to equip every child in The Bahamas with a virtual learning device.

“I am proud to announce today that Leno is marking its 10th anniversary by committing our energy and resources to partner with the Ministry of Education to do our very best to put a device in the hands of every child in The Bahamas,” said Longley.

Speaking during a virtual press conference with media participating online, an event that in itself mirrored the type of environment students will face when schools re-open October 5 for online learning, Longley said Leno will kick off the national campaign with a donation of $60,000.

“Under normal circumstances, we would have planned a celebration to mark our 10-year anniversary, commemorating our growth from an initial staff of four to nearly 40 today with a vastly expanded product shelf and client base, but when COVID-19 burst onto the scene and upended our worlds, we immediately knew we needed to turn our energy toward serving the community. And in that regard, we felt there was nothing more urgent, once feeding needs were met, than ensuring that every student in  The Bahamas had a chance to learn under a new regime that might involve virtual classrooms for an unknown period of time.”

According to the Ministry of Education, there are more than 36,000 students who may not have access to a tablet of their own. Education Minister Jeffrey Lloyd was quick to endorse the program.

“We have identified 36,303 students in need of a device to participate on a virtual learning platform, a daunting number. We knew government could not do this alone. So you can imagine my relief when I got a phone call saying that a corporate citizen, LENO, wanted to lead a national effort to give every student in The Bahamas an equal opportunity in a changed environment…I am honoured an humbled by LENO’s commitment that has been re-affirmed in subsequent meetings.”

In addition to the $60,000 donation, Longley is covering costs of advertising, spreading the message throughout The Bahamas and beyond the borders urging others to contribute. It is calling on clients and colleagues to support the cause.

“The Ministry of Education has identified wi-fi and my-fi enabled tablets for students at different levels and the cost is less than $200 per tablet,” said Longley. “That is a very small price to pay to give a child or an older student a fair chance in an unfamiliar environment. As we remember how difficult it was for many of us to pay attention in every class, to complete our assignments, to take an interest in subjects of less interest to us when we had teachers right in front of us and friends in class, we can only imagine what it will be like for that young boy or girl who now must learn alone, in front of a screen, and absorb all those lessons. But imagine how much worse it would be if that young boy or girl is totally left out simply because he or she does not have a tablet or laptop. We cannot allow thousands of young people to be left behind because of the lack of one piece of equipment. So I urge everyone within range of this plea to support a device in the hands of every child through the Leno Learning Link.”

The Leno Learning Link is not the firm’s first foray in the education arena. Leno is supporting the University of The Bahamas with a $250,000 pledge over ten years. For the past three years, it has sponsored an annual financial literacy essay competition with prize money to students and the schools which winners attend. Leno also supports numerous other community projects and causes, including Colours Junkanoo group, the Leno Bowling Team that has twice held the national Financial Services League title, a swimming event and a basketball league.