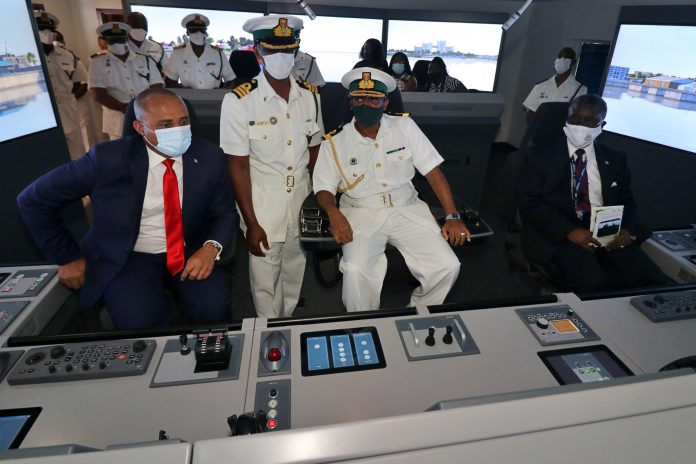 During the Commissioning of the Royal Bahamas Defence Force (RBDF) Ship’s Bridge Simulator, on September 24, 2020, Minister of National Security the Hon. Marvin H. Dames said that the simulator was built under the $232 million Sandy Bottom Project, that was signed in 2014. “The Alphatron / NAUTIS Full Mission Bridge Simulator was built by Alphatron Marine and V-Step for DAMEN in Rotterdam, Netherlands, and installed at HMBS Coral Harbour in January 2018,” Minister Dames said at the ceremony held in the
Training Auditorium of HMBS Coral Habour.

“Moreover, Officers and Marines, I am advised that the simulator is tailor made for the needs of the Defence Force and utilises software that incorporates the characteristics of the four major classes of ship and the 60 meter vessels of the RBDF to assist in training BRIDGE teams to operate the vessels in different and sometimes difficult maritime scenarios,” Minister Dames said.

“I am especially impressed with the Instructor Operating Station — or the IOS — which can create, record and debrief new scenarios; load, start, pause, reposition and replay scenarios; and monitor progress during run time and from helicopter view,” Minister Dames said. “From the IOS, I am advised that instructors can control targets; weather; wind; wave current; and other scenarios they wish to test students on,” he added. “This allows navigators and XO’s, Engineers and CO’s of craft to guide and test from the safety of harbours, which can possibly save the Government tens of thousands of dollars each year for taxpayers, as mistakes are identified and corrected before heading out.”

Minister Dames pointed out that the Full Mission Bridge Simulator would also afford Officers and Marines the opportunity to obtain training on mooring for Coral Harbour; some parts of New Providence and Freeport; anchoring; replenishment at sea; man over board; rules of the road; and proper operation of ship BRIDGE equipment in those challenging scenarios.

“The simulator can also adapt to sea levels and change for day or night navigation, as well as different types of rain and visibility,” he said, Minister Dames added that the equipment should bring a level of comfort to RBDF officers and their families, as it is designed to complement their professional training and to aid in keeping the crew and vessels safe.

“As the Minister with responsibility for National Security and the Royal Bahamas Defence Force, I eagerly anticipate the dividends that will be reaped from this state-of-the-art training equipment,” he said. “I take this opportunity to thank Commodore King; his Executive Command; Commander William Sturrup — and his team who are charged with the responsibility for the use of the stimulator — and all the men and women of the RBDF, who continue to proudly and boldly ‘Guard Our Heritage’.”