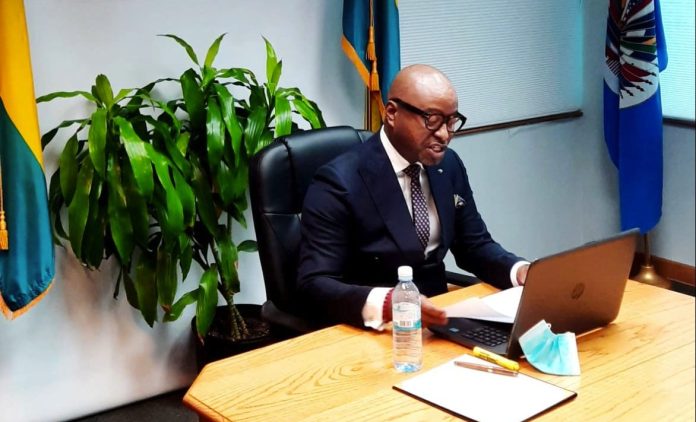 Following two days of intense dialogue, Minister Darren Henfield, President of the 50th Regular Session of the General Assembly (GA) of the Organization of American States, brought its work to a closure. He noted that during the GA, the delegations held a frank dialogue on the theme of the Assembly, “Facing the Challenges of COVID-19 in the Hemisphere: A Collaborative Approach to Address Vulnerabilities and Build Resilience in Times of Crisis, Based on the Four Pillars of the OAS” as well as on other issues of importance to the hemispheric agenda.

The General Assembly approved a host of Resolutions and Declarations of utmost importance to countries of the region, underscoring the relevance of the OAS as the premiere political forum of the hemisphere. The Minister noted that the Organization has the capacity to reach agreements while respecting the differences that exist between sovereign states. Despite the challenges of meeting virtually, member states were able to have a rich and productive meeting on issues relating to the impact of the COVID-19 pandemic on the Latin American and Caribbean region; one of the hardest hit regions in the world. The pandemic has caused countries of the regions to see inequalities more clearly, noting that women and children are at the greatest risk. In this context it will be necessary to pay particular attention to the education of children to ensure that they are not unduly disadvantaged and are not left behind.

Obtaining a vaccine that is affordable and equally accessible to all citizens of the Americas is of paramount importance to the region, as well as the need for food security which ensures availability, accessibility and affordability at all times. The reactivation of
the economies of the Americas is also of immense concern and this must be done in a manner that safeguards the health and safety of the citizens of the Americas. Climate Change remains an issue of enormous concern; and more importantly the sustainability of Oceans and a Blue Economy. Issues with respect for human rights across all sectors of society was clearly conveyed, with special emphasis on the rights of women and the elimination of violence against women. Delegations also referred to financial issues and the need for a level playing field in the international financial arena together with adequate discourse to prevent unilateral financial sanctions on countries.

In closing, Minister Henfield thanked member states for their participation and the OAS Secretariat for their support. He conveyed that it was an honour to have presided over this first ever virtual General Assembly.