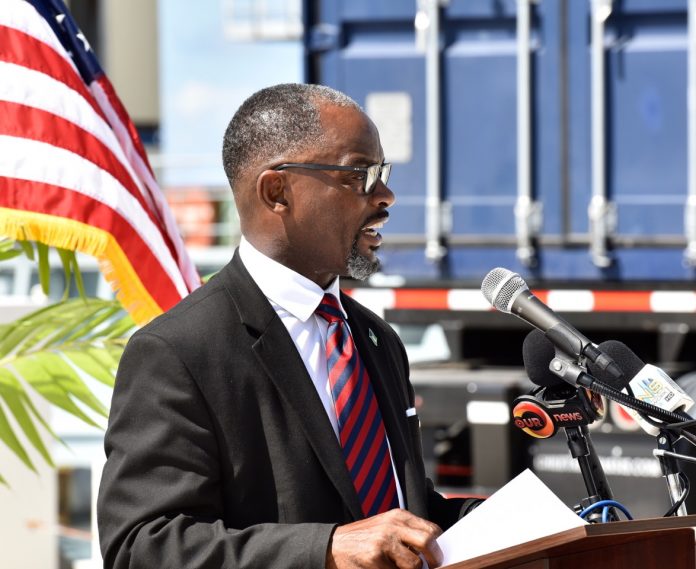 The newly established Min. of Disaster Preparedness, Management and Reconstruction has, along with the rest of the country, faced significant challenges due to Hurricane Dorian followed by the COVID-19 pandemic. Minister of State for the Ministry of Disaster Preparedness, Management and Reconstruction, the Hon. Iram Lewis, during his report on Thursday, October 29, described the challenges as “unprecedented” making note of climate change and the global pandemic. The Minister outlined the various steps being taken by Government to help strengthen not only the building codes to better face the onslaught of the stronger and more frequent hurricanes, but recovery efforts as well.

Through efforts by the United Nations Development Programme (UNDP) and the University of the West Indies (UWI), said the Minister, reports were submitted to the Ministry and endorsed by Cabinet to undertake a number of steps which will result in the adoption of The Bahamas Resilient Recovery Policy.

Those affected by a disaster may sign up for support as wellas those offering to volunteer their services may sign up for accreditation and approval.Additionally, he said, the call centre is now digitized with a new database that can generate various reports.

“The Ministry of Disaster Preparedness, Management and Reconstruction and NEMA continues to work along with the Ministry of Health through its Emergency Operation Centre (EOC) providing advice and mobilizing resources to assist with combating the Coronavirus Pandemic.

“It is noteworthy that NEMA was most instrumental in coordinating a team of volunteers to assist with managing government quarantine sites for Bahamian nationals and residents who returned from the United States”, he said. Listing a few donations made to The Bahamas, the Minister said the country has received three shipments of Personal Protective Equipment from the United Arab Emirates, the Caribbean Development Bank and the Jack Ma Foundation, which have been turned over to the Ministry of Health.

A $3.8M donation of equipment and supplies from the United States resulted in receiving 12 rescue boats, engines, safety stretchers, life vests and trailers; emergency relief supplies to be added to warehouses in Great Inagua, Grand Bahama and the Coral Harbour Base; PPE’s; handheld radios; materials to repair government designated shelters in Grand Bahama and Abaco; and mobile air-conditioned shelters with back-up electrical supply, kitchen and personal hygiene facilities for fast and efficient shelter for affected people.

The Minister said, “NEMA continues to work with local, regional and international partners seeking out opportunities for knowledge exchange and mobilizing resources, to assist with capacity building in areas of disaster management throughout the country.” He continued, “Today, in the aftermath of Hurricane Dorian, NEMA continues to transport basic disaster relief supplies from it emergency relief warehouse in New Providence for persons in need in Grand Bahama, Abaco, and amongst various charitable organizations in New Providence.

“NEMA is now implementing 15 contracts as a part of a collaborative effort with the United States Northern Command to repair a number of government designated shelters that were damaged a result of Hurricane Dorian. Thirteen of these shelters are in Grand Bahama and two are in Abaco.” He further added, “The Ministry of Disaster Preparedness Management and Reconstruction, and other key agencies such as the Ministry of Finance and the Department of Meteorology, will continue to collaborate with the Caribbean Catastrophe Risk Insurance Facility (CCRIF) to ensure that The Bahamas obtains the most cost effective policy options for tropical cyclones and excessive rainfall events.

“CCRIF limits the financial impact of natural hazards to governments by quickly providing short –term liquidity when a policy is triggered. CCRIF has made two pay-outs totalling US $12.8 million to the Government of The Bahamas following the passage of Hurricane Dorian.

“We are seeking to determine the cost effectiveness of the fisheries industry and utility corporations participating in the CCRIF insurance program so that they too are able to be in a position to receive some short – term liquidity if those sectors are severely impacted by a natural disaster.” Minister Lewis announced the launch of the Guide to Housing Standards for The Bahamas – Build Back Better, a production of his Ministry along with the Ministry of Public Works. Assistance was also given by the United Nations Development Programme, Engineers Without Borders, Shelters Sector Bahamas, NEMA, the Building Control Department of the Ministry of Public Works, the University of the Bahamas School of Architecture and private sector engineers, architects and
contractors.

“The impact of Hurricane Dorian on the housing stock of the second and third most populated islands of The Bahamas, namely Grand Bahama and Abaco, resulted in damage to residences that is estimated to exceed one hundred million dollars $100,000,000. The Disaster Reconstruction Authority through its home repairs program has registered over 4,000 residents for home repairs on the islands of Abaco and Grand Bahama. As of July 1st 2020, the Grand Bahama Port Authority estimated that, within the two hundred square mile district of the Port Authority, approximately 4,637 homes were impacted to varying degrees by the storm.

He said rapid assessments were conducted in the aftermath of hurricane Dorian by teams of local professional architects,engineers, building contractors and Ministry of Public Works technical officers. The site inspections revealed that, as expected, there was extensive damage due to flooding from wind and sea surge. However, for the damage not related to wind and sea surge, damage was largely due to the level of non-compliance with the prescriptive requirements of the current Bahamas Building Code.

The Minister stated, “On 1 st December 2019 the Disaster Reconstruction Authority began its rebuilding efforts in Abaco, its Cays and in Grand Bahama. “As a result of the level of devastation, steps were taken to evaluate the most urgent needs and to develop work programmes around seven reconstruction priorities: Environment, Education, Economy, Health, Housing, Infrastructure and
System Improvements.

Minister said, “It was determined that the areas requiring immediate attention included: debris management, community and marine clean up, development of a small home repair assistance program, housing (for temporary, medium and long term solutions), school repairs and construction of community centres that would also serve as hurricane shelters. “