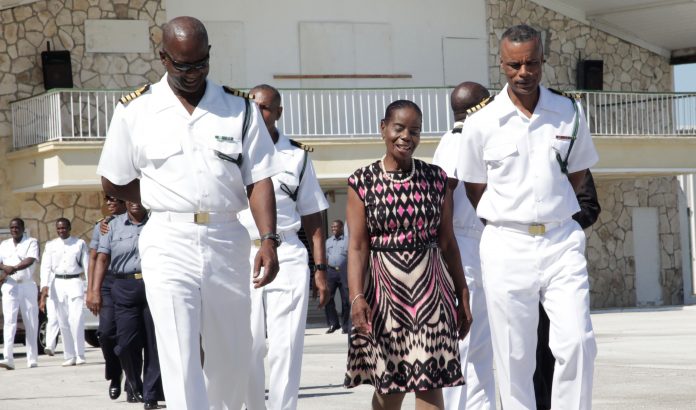 As the Royal Bahamas Defence Force continues to embrace the past during its 40th Anniversary, we highlight Mrs. Deloris Pratt: A Human Resources Pioneer. She never wore the uniform of a Defence Force Officer or Marine, but for her many years of service, Mrs. Deloris Faith Pratt was, and will always be a member of the Royal Bahamas Defence Force. Born in the farming community of Mangrove Cay, Andros on September 6, 1950, Mrs. Pratt has dedicated 47 years of her life to public service, with 35 of those years working at the Defence Force Base, Coral Harbour.

After graduating from the C. H. Reeves High School in 1968, she began employment in the Min. of Education, where she worked her way up to the position of Senior Clerk. It was in 1979 that she seized the perfect opportunity, which would positively impact her career and her life.

“While coming home from work at the Ministry of Education, I used to see this white bus passing with these young men in it”, said Mrs. Pratt. “I said, that’s something different. I want to be part of that, so I made inquiries. I knew that I was too old to join the military, but I just wanted to be involved as a pacesetter, ‘cause I know it was a something new”.

After she was transferred to the Ministry of Defence, Mrs. Pratt was immediately assigned to the Administration Department, albeit working as a Human Resource personnel. The section was later named the Personnel Files Office, where Defence Force personnel complements the staffing. It was due to the tireless ground breaking efforts of herself, and those attached to the PFO section, that this area of the Defence Force is well established. In addition to maintaining the personal files of all of the Defence Force’s Enlisted, the team began prioritizing and streamlining the Colina Group Insurance that is afforded to all serving members of the Defence Force. Finding herself in a sensitive area of the force, Mrs. Pratt relished the idea of helping the organization grow and develop its systems, policies in alignment with the public service. She is of the view that because the Defence Force was a young entity, it was required that the job be done right the first time around, as to ensure that those who succeed her will could continue to build and develop the agency.

Deloris Pratt has seen seven RBDF Command Changes during her tenure at the Defence Force Base, beginning with Commodore William Swinley, and ending with then Acting Commander Defence Force, Captain Tellis Bethel at the helm. She is thrilled to know that she has lived to see the Royal Bahamas evolve into being the “Best Little Navy in the Region”.

“When I see the young men and women who joined the force, advance to the next rank, or join the Officers Corps, I am thrilled to witness their progress”, said Mrs. Pratt. “I am also proud to see how the Defence Force as an organization has excelled to the point of being a great force both nationally and internationally”.

Mrs. Pratt describes herself as a helpful and caring individual. She says that other individuals look up to her as a trusted friend. She is widowed and is a mother and grandmother to her offspring. During her early years of working at the Defence Force Base, she and her co-worker at the Base, Mrs. Florence Coleby were often seen together during their breaks. Mrs. Pratt was often referred to as “the Insurance Lady” by her friends, and her nicknames at the Coral Harbour Base were “Mrs. Deloris Ingraham” and “Mother Pratt”.

Nowadays, she is actively involved with her local church, New Destiny Baptist Cathedral, where she assists with keeping in touch with the sick and shut-in members, among other roles and she’s also a part of a fraternal organization, the Improved Benevolent Protective Order Elks of the World. She shared a sad occasion in 2004 when her husband, Edward died. She recalled the outpouring of love and support that she did not expect from members of the Defence Force. She made special mention to Commodore (Retired) Tellis Bethel, who encouraged her greatly as he told her: “I will pick up the mantle to watch over you, as your husband can only do so from the arms of the Lord”.

As one of few civilians employed at the Defence Force Base, she retired from the public sector in October 2015. With family and friends in attendance, Mrs. Pratt was escorted to the base in a limousine and showered with numerous gifts and accolades from Acting Commander Defence Force Captain Tellis Bethel and the Officers and Marines.

This committed lady who had given many years of service to the Min. of National Security still had few regrets. “There are three things; I am sorry I didn’t get the opportunity to take up a computer course in the IT section, make a sea trip aboard one of the Defence Force craft, and to see one of the outposts, particularly HMBS MATTHEW TOWN”, confessed Mrs. Pratt.

“Well I did make a trip aboard (HMBS) INAGUA. The Commanding Officer asked me if I wanted to go with the crew on a test run, and I greatly obliged, although it was only far as the one-mile buoy. I thoroughly enjoyed that short trip”. Mrs. Pratt assured that she prepared herself for retirement.

“I realized retirement was coming, so I armed myself with lots of knowledge and information, because I know that one day, I will have to move off the scene”, said Mrs. Pratt. “I welcomed it. When it came, I had no difficulty moving on, because I know I didn’t keep all the information to myself”. She also left a few final words of advice for current serving members:

Because of that, I encourage you to remain on the Defence Force. Don’t mind what’s happening around you. It’s gonna be hard and difficult, cause nothing in life comes easy. You appreciate it more when you have to fight for it. That has helped me in my career in the public service”. Thank You Mrs. Pratt from a grateful Force. Continue to experience fair wind and following seas!