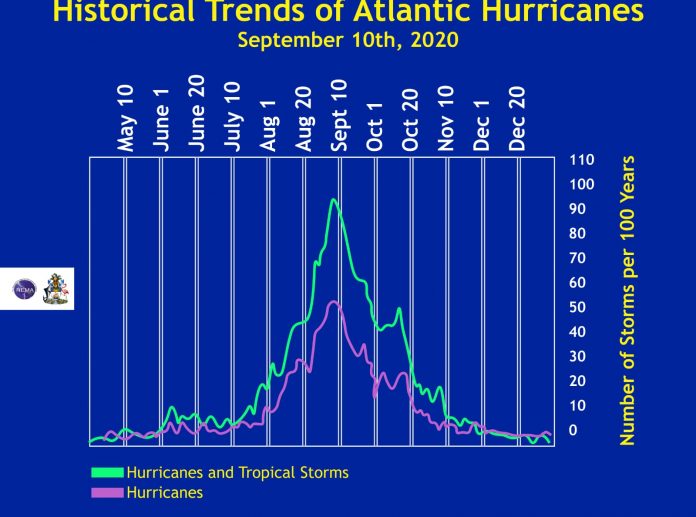 September 10 is considered to be the date for the peak of the Atlantic Hurricane Season.

And in this regard, the National Emergency Management Agency, NEMA, is urging all residents to remain prepared. Captain Stephen Russell, Director of NEMA, said that the agency and the National Disaster Consultative Committee comprising the 14 Emergency Support Function groups remain in a state of readiness should a storm threatens the country. He noted that the Atlantic Basin has been very active, with the latest weather systems, Tropical Storm Paulette and Tropical Storm Rene also forming on September 7.

Captain Russell said, “We are grateful that Hurricane Isaias, which passed through The Bahamas, and Tropical Storm Laura which passed along the southern coast of Cuba, did not result in any significant damage to The Bahamas.” The peak period of the 2020’s Atlantic Hurricane Season heightens concerns as the world, particularly the region, is also dealing with the effects of the corona virus disease (COVID-19) pandemic.

Social distancing measures, lockdowns, curfews, and travel restrictions may complicate preparations and relief efforts as the storm season kicks into high gear. Captain Russell also reminded the public to adhere to safety protocols: wash or sanitize your hands regularly; wear your masks properly over your nose and mouth; stay physically distant from others; do not attend mass gatherings; stay at home if you and not feeling well and contact your health care provider if necessary.

“From mid-August through mid-October, activity markedly increases with September 10 being the statistical peak of the hurricane season,” Basden said. “This may be interpreted as the day you are most likely to find a tropical depression, tropical storm, or hurricane somewhere in the Atlantic Basin.”

This year, the season was forecasted to be a very active one, such that 25 named storms were predicted – the most ever forecasted for a season. Added Basden: “Isaias, the second hurricane to form this year, moved through The Bahamas during the last two days of July and the first two days of August but only attained Category 1 strength. During the third week of August attention was given to Tropical Storm Laura, which was originally forecasted to also move up The Bahama Island chain and become a major hurricane while doing so.

“However, Laura was steered to move west across Hispaniola and then along the southern coast of Cuba and eventually making landfall in Louisiana as a Category 3 hurricane,” said Basden. The Met director assured the public that local Met experts are closely monitoring the tropics. “No matter whether it is before peak season, during peak season, or after peak season, be assured that The Bahamas Department of Meteorology will monitor the Atlantic Basin and inform the Bahamian people of its tropical cyclone status,” said Basden. He too reminded the public of the need to be prepared “and that it only takes one storm to make it a bad Hurricane Season for you.”