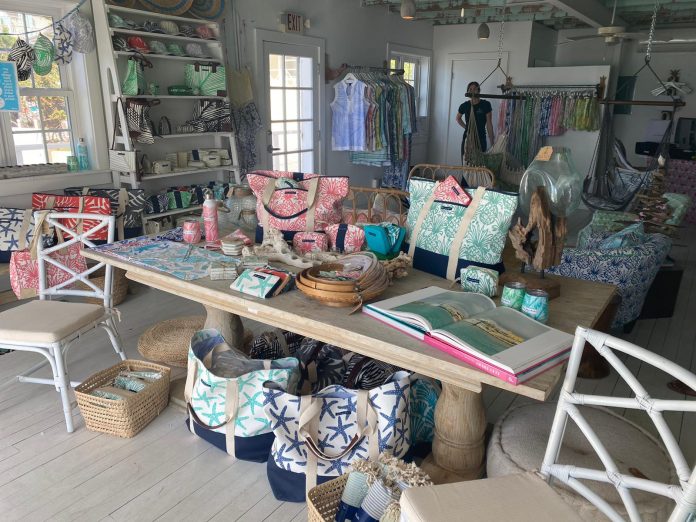 When Brooke Phillips Pyfrom flew back to The Bahamas after college, there was only one certainty in her future. “A big feast of conch salad, followed by a short stint in my father’s business to assuage all the
years of sports academies and higher education. I never dreamed it would turn into this.’ This, as she puts it, is a nearly 10-year journey that took her from managing the business, Phillips Sailmakers & Awning Manufacturers on East Shirley Street in Nassau, to growing its spin-off, Oasis outdoor furniture division, into a hugely popular and much talked about indoor furniture, home décor and gift store with its own location in Sandyport.

Now, less than three years since Oasis opened that western location and just months after Jennifer Treco joined the company as in-house designer, the women-run business is opening in its third location, collaborating with another women-run business, Bahama Hand Prints in Governor’s Harbour, Eleuthera. “When Alannah (van Onselen) and her husband, David and their three children moved back to her home in The Bahamas in 2018 after 10 years in David’s native South Africa, they purchased Bahama Hand Prints. Alannah immediately threw herself into building on the legacy that had made the screen print fabric famous and recognizable around the world for more than half a century,” said Pyfrom.

“We love her energy and drive and where she taking the line so when she approached us about opening a division of Oasis in her shop in Eleuthera, we felt truly honoured.” Pyfrom and Treco agree the collaboration works for both businesses. “Alannah produces the placemats and napkins and we supply the napkin rings to tie it all
together,” says Treco.

“She produces the throw pillows and we supply a wicker daybed to showcase the pillows. We think of it as expanding our footprint with Bahama Hand Prints,” continued Treco, who specializes in working with designers and decorators. “Eleuthera is getting hotter by the minute so we are really pleased to be in on the ground floor of this beautiful store.” Oasis in Eleuthera opened this month and carries home décor items sourced from around the world and suitable for a Family Island casual, beachy lifestyle, says Treco — candles and candle holders,
throw pillows, rugs, lamps, some furniture — “those extras that make a table setting inviting or a living room feel homey.”

There is more to the irony of the marriage between the designer of fabrics on bags, totes, place mats and clothes and the home décor boutique. “Bahama Hand Prints was created in 1966 by two women artists, both now deceased Berta Sands and Helen Astarita,” said Pyfrom. “I grew up almost next door to Mrs. Astarita and was always
fascinated by her art work even as a young child. I felt privileged to know this incredible woman who could build equipment yet paint a delicate Easter egg so beautifully it should have been preserved as art.
I just wish she could see us now helping Alannah carry on the business she and Mrs. Sands created.”

Bahama Hand Prints opened in Governor’s Harbour in 2019 and is its third location. The company also has a store at The Island House in western New Providence and the public is invited to tour its plant and showroom off Mackey Street where much of the original fabric printing machine designed by Mrs. Astarita is still printing new and fresh designs. Eleuthera is also Oasis’ third location. Its original outdoor furniture showroom remains where Pyfrom started out repaying a college debt to family, on East Shirley Street at Phillips Sailmakers &
Awning Manufacturers.