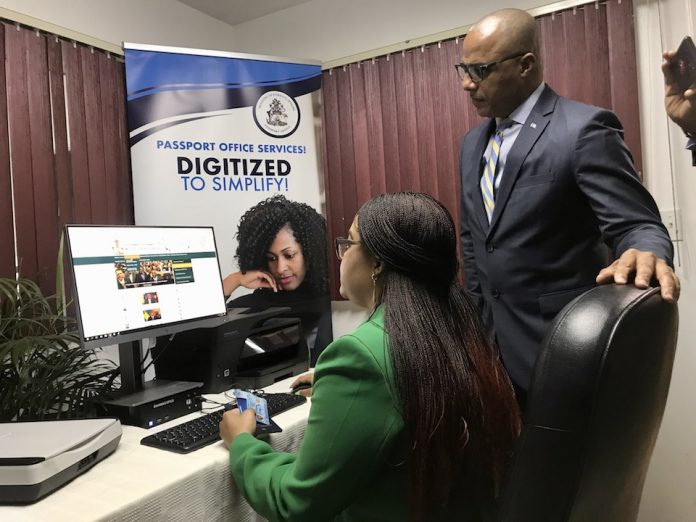 It’s official! Bahamians adults will now be able to renew their passports online via the newly launched portal.  The online process for minors is slated to commence by February 2020. The announcement was made on Monday, 9th December 2019 during a ceremony held at the Passport Office.  Acting Minister of Foreign Affairs, the Hon. Marvin Dames was on hand to officially launch the portal. He said that this would serve to relieve the historically long waits associated with this process. “The online portal is an alternative that will serve to relieve the waiting lines at the Passport Office for the renewal of adult e-passports,” said Minister Dames.

“Once the online application is successful, our citizens will be able to collect their documents from the New Providence and Grand Bahama passport offices or from one of our missions in the United Kingdom, China, the United States of America and Canada. He said that the online portal is now operational and will include support in the form of a help desk with operators to assist the general public with any technical matters that may arise during the application process. It is expected that the turnaround time would be between 7 to 10 days, with applicants having the option to also request emergency passports at an additional cost.

Acting Chief Passport Officer, Siobhan Deane said that applicants would also be able to pay for their passports online. She pointed out that the costs remain the same. In addition, she noted that if biometrics were required, applicants would have to visit a local passport or one of the overseas missions to provide those. “If biometrics are required, they would have to come in to verify their identity,” said Ms. Deane. “This would be just for the one time for those persons whose are not in the system.”

The new portal would also greatly benefit citizens of the Family Islands, who would otherwise have to make a trip to New Providence to renew their passports.  Plans are underway for satellite offices to be added to the islands of Exuma, Inagua, Long Island and Eleuthera and should be operational by the first quarter of 2020.