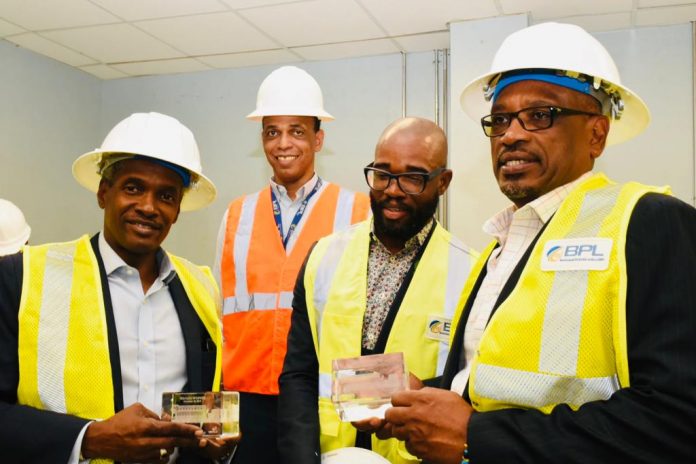 Energy sector reform and reducing energy costs are vital to lower the cost of living for Bahamians and the cost of doing business, said Prime Minister the Hon. Dr. Hubert Minnis on Friday after pushing the button to start Engine One at Bahamas Power and Light’s (BPL) new Station A at the Clifton Pier plant. Station A, the largest single power plant in Bahamian history, is a major part of the Government’s energy reform strategy and the eventual lowering of costs for families, homes, businesses and potential new investors from home and abroad.

“It will allow BPL to stabilize supply to New Providence. It will facilitate our transition to cleaner more affordable fuel,” said the Prime Minister.
“Having modern, more efficient generators using less expensive and cleaner fuel will reduce the cost of electricity for all Bahamians and residents.” The $95 million, 130-megawatt plant was brought online on 15 December. It is equipped with seven Wartsila 50DF tri-fuel engines that are burning light fuel oil but have the capacity to burn natural gas or heavy fuel oil. On Friday, 20 December the Prime Minister, Cabinet members, BPL Board members, select customers and the media were given a tour of the new plant. Prime Minister Minnis said that Station A marked the beginning of a new chapter that was long overdue – fixing a longstanding and vexing problem that should have been fixed
decades ago.

He said his government is committed to addressing longstanding problems including the problems at BPL. Station A and the seven state-of-the-art Wartsila engines that it houses means decades of clean, less costly, reliable power for New Providence, said Prime Minister Minnis.
“[It] means new opportunities for investment and economic growth and jobs and business opportunities,” said the Prime Minister.

“And it means an end to summers of load shedding on New Providence.” The Prime Minister acknowledged that there is still much more work to be done at BPL for it to be the modern power utility that the people of The Bahamas deserve and demand. He emphasized that the Government is committed to working with BPL to continue the
progress seen Friday at the new Station A but it will also hold BPL accountable on behalf of the Bahamian people.

“This power plant is only one step, albeit an important one, in the journey BPL must make to restore the confidence of Bahamians,” said the Prime Minister. Energy sector reform will also include solarization in our Family Islands which, over time will also bring down electricity costs for consumers in New Providence who help to subsidize costs for Family Island residents, said the Prime Minister. “Our vision of energy reform and lowering the cost of electricity will mean a better, more
productive and more vibrant economy for all Bahamians,” said Prime Minister Minnis. “We are moving in the right direction as a country.”

Statement on the passing of Candy Pinder, Proprietor of Abaco Big Bird

Request for the Immediate Collection of Deceased Persons from PMH

Independence Prayer Walk to be held on Friday

Independence Prayer Walk to be held on Friday

Statement on the passing of Candy Pinder, Proprietor of Abaco Big...