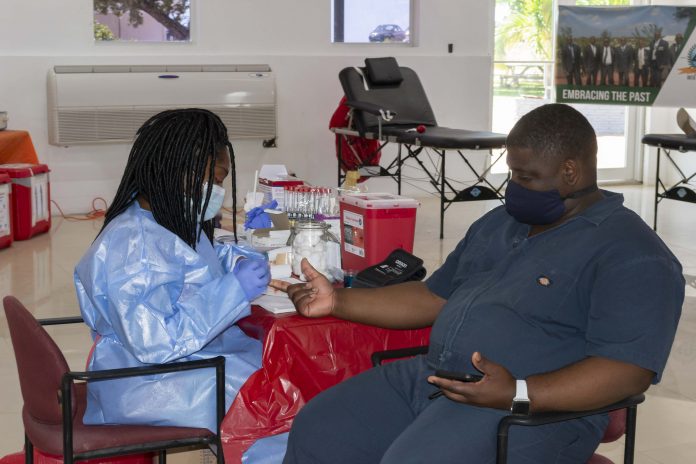 The Princess Margaret Hospital (PMH) Blood Bank benefitting from a successful blood drive hosted by the Royal Bahamas Defence Force (RBDF). The event which took place on Friday September 18th was the second such recent collaboration by the Defence Force and the Public Hospitals Authority (PHA). The drive, which netted twenty-four (24) units of blood, commences a part of the RBDF’s community outreach.

“This is just the start of our being more community driven, seeking to be more nation minded, more nation builders. This is just the start of many deliberate community efforts on the part of the Royal Bahamas Defence Force,” said Commodore Raymond King. He advised that, “a committee had been formed and that a special unit would shortly be implemented tasked specifically with community relations, to drive the organization’s impact and give back to those less fortunate.”

Expressing appreciation, PHA’s Director of Communications, Judy Terrell, said, “these events allow us to not only further expand our community outreach, but build upon corporate partnerships for the benefit of all sides and by extension the public.” She described the collection of the 24 units of blood as a significant donation as it represents almost of one quarter of what is usually procured during national blood drives. “To put it into perspective, one unit of blood can treat up to three patients in need,” she said.

Commander Floyd P. Moxey, Base Executive Officer, and his team worked closely with the Public Hospitals Authority (PHA) and the staff from PMH Blood Bank to ensure the success of the initiative. Other partners included Commonwealth Brewery, Caribbean Bottling Company Ltd., who provided beverages and local telecom provider Aliv, who provided gift bags for marines and officers who donated during the blood drive. Another RBDF blood drive to support the PMH Blood Bank is planned for December 2020.