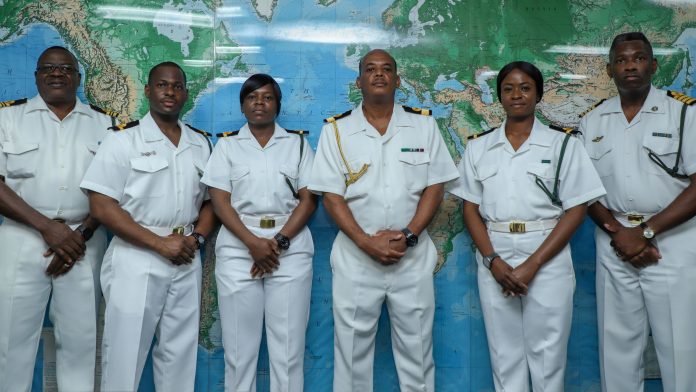 Sub Lieutenants Natasha Major, Lashonna Williams and Renaldo Wilkinson are the newest addition to the Officer’s Corps of The R.B.D.F after successfully completing conversion courses for Naval Officers in New London, Connecticut. Both Sub Lieutenants Williams and Wilkinson attended the Officer Candidate School at the U.S Coast Guard Academy from 5th January through 13th April, 2020, while Sub Lieutenant Natasha Major attended the Officer Indoctrination School from 6th January through March 23rd, 2020, also at the USCG Academy.

The courses, which were sponsored by the International Military Education Training Program, are designed to educate and train officer candidates to ensure that they possess the moral, intellectual and physical qualities, and the leadership potential to serve effectively as Commissioned Officers. The curriculum included academics, leadership and management, nautical science, health and physical readiness, customs and courtesies, military traditions, and Coast Guard history.

The Academic aspect of the course gives the officer an overall view of the Coast Guard. It also exposes them to Maritime Law Enforcement, Military Etiquette, Unified Code of Military Justice, Effective Writing, Communication Skills and First Aid. The Leadership and Management section assesses the officer’s Leadership Abilities, Managerial and Conceptual abilities.

Evaluations are based on Personal Conduct, Military Aptitude, Situational Awareness and Leadership Positions. Sub Lieutenants Williams and Wilkinson were responsible for various administrative duties, including Officer of the Day, Junior Officer of the Day, Academic section leader and squad leader. Additionally, Sub Lieutenant Williams served as Property Assistant Officer, Alpha Leader in charge of Common Spaces, and designated leader in charge of showing the platoon how to prepare their rooms for inspection to drastically help reduce the demerit count for the overall Alpha Company.

The Nautical Science aspect included a 10-days tour of duty aboard the US Coast Guard Cutter EAGLE, where the officers were required to apply the knowledge of Piloting, Maneuvering Boards, Rules of the Road,Ship Handling, Celestial Navigation, Shipboard Communication,
Tides and Currents, Nautical Nomenclature and The Compass System. The craft made patrols from New London, Connecticut to Charleston, South Carolina, and conducted several exercise drills. The Officers also attended a two-day training session in Fire Fighting and Damage Control in Newport, Rhode Island.

A licensed Customs broker, she is currently pursuing her BBA degree in Accounting at U.B. She is married to Marcus Major, and the couple has 2 children, Ashanta and Marcus, Jr. Sub Lieutenant Williams is also a 1999 graduate of the Government High School and she also enlisted in the Defence Force in January 2004.

Williams has served in numerous departments, including the R.B.D.F Band, Northern Command, Prosecutions, Administration, Military Aid to
Civil Authority, Urban Renewal, Rangers, office of the Base Executive Officer and the Training Department. She obtained an Associate Degree in Law and Criminal Justice from the University of The Bahamas in 2017 and is the mother of 1 daughter, Jashonna Brown.

Sub Lieutenant Renaldo Wilkinson is a 2003 graduate of St. Johns College, and joined Defence Force in August 2004. He has served in the Mechanical section of the Engineering Dept., and has completed various U/S Military funded courses in York Town, Virginia, including the Mechanical Engineering “A” level Course and the Hydraulics and Components “C” level courses in 2012. He has also served in the Accounts and Training Department prior to attending the Officers Course.