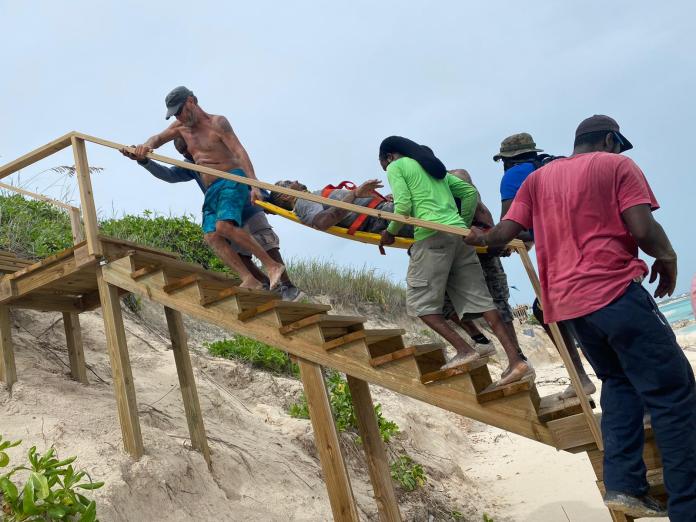 Royal Bahamas Defence Force Marines stationed on Guana Cay, Abaco, were called to assist the local Police in a rescue effort early this morning (October 3). Police stationed on the cay were informed of an incident about 10:20 am, that sand had collapsed
on a worker who was carrying out construction work. Mr. Damien Smith, a resident of Marsh Harbour was among several workers on Guana Cay, in the process of repairing a sea wall at Nippers Beach Bar & Grill. As a result of the digging to replace the braces for the seawall, the sand collapsed, resulting in Mr. Smith being partially buried.

In a joint effort, Able Seaman Kameron Armbrister and Marine Seaman Odrick Roberts, along with 2789 Corporal Zhivargo McKenzie of the Police Force and members of the community assisted in digging and lifting Mr. Smith out of the trench. He was transported by a boat utilized by Mr. Troy Albury (Councilman & member of Guana Cay Committee). On arrival to the mainland, they were met by an ambulance who carried out a preliminary check on Mr. Smith and proceeded to transport him to Marsh Harbour Clinic. Last reports indicated that he is responsive and receiving further assessment and treatment. The Royal Bahamas Defence Force remains in a state of preparedness, ready to assist other uniformed branches of government and the wider public in times of emergency.