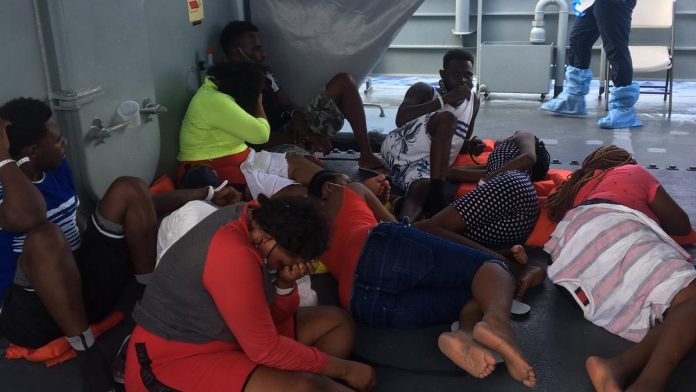 A total of twenty-one (21) Haitian migrants are being detained in Matthew Town, Inagua, after they were apprehended in waters off Florida by a U.S Coast Guard Cutter on Thursday past. After receiving information that migrants were intercepted aboard a 25-ft Bahamian registered Wellcraft vessel, patrol craft HMBS BAHAMAS under the command of Lieutenant Commander Valentino Rolle was called to assist. The transfer between both the USCG Cutter and the Defence Force Patrol craft was conducted at Goulding Cay, located west of New Providence on Saturday 18 July.

There were initially 23 migrants, however, 2 were flown out for medical reasons. Following the transfer, HMBS BAHAMAS proceeded to Great Inagua, where they arrived on Sunday July 19th. Instead of being housed at the Defence Force’s Maritime Facility as initially intended; plans were changed prior to arrival in Matthew Town where the detainees were immediately handed over to Immigration Officials on the island for further processing and staging at the Police station.

Force Medical Officer, Lieutenant Commander Derward Johnson explained that there are proper protocols in place for all RBDF vessels and personnel that will greatly aid in safety and security of personnel during incidences like these, “including sanitization protocols, quality personal protective equipment and training on how to don and remove gear”. Lieutenant Commander Rolle has confirmed that his crew are on heightened alert and are monitoring temperatures and symptoms of crew and migrants. Prior to being transferred, all of the migrants were screened for COVID symptoms, with none displaying any signs. The Royal Bahamas Defence Force continues to patrol and protect the territorial waters of The Bahamas.