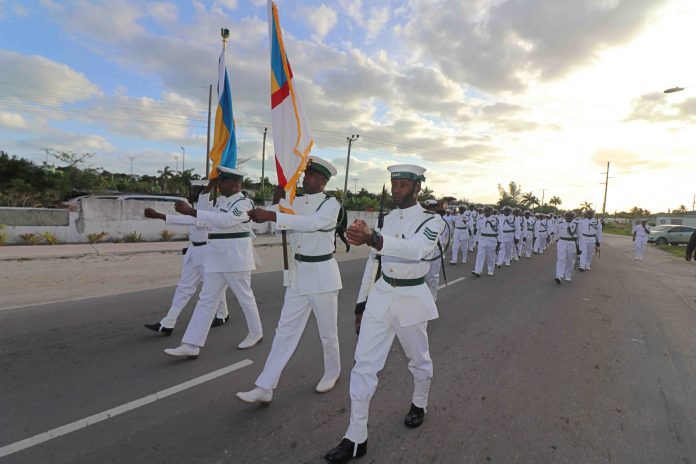 Minister of National Security the Hon. Marvin Dames brought remarks, on March 1, 2020, at the Royal Bahamas Defence Force Annual Church Service, held at Hillview Seventh Day Adventist Church during which he revealed plans to significantly increase recruitment numbers of the Force.  The service marked the RBDF’s 40th year of existence. Also present were Deputy to the Governor General Mrs. Lonnie Emmeline Rolle and her husband Cedric; Commissioner of Correctional Services Charles Murphy; Comptroller of Customs Dr. Geannine Moss; Assistant Director of Immigration Dwight Beneby; senior officers of the Royal Bahamas Police Force and other members of the uniformed branches; a number of Ambassadors and members of the Diplomatic Corps; representatives of the United States Embassy and military; retired officers and military veterans; RBDF Rangers; and other stakeholders.

Minister Dames commended Acting Commander of the Royal Bahamas Defence Force (RBDF) Captain Raymond King and his officers for the role they play in nation building, disaster response, and protecting the borders of The Bahamas.  Minister Dames also pointed out that the theme for the Service, “Beyond the Horizon, Into the Future,” was quite fitting for an organization repeatedly tested and tried yet seems to represent hopeful anticipation complete with the necessary resolve, determination, and unwavering commitment to achieving its mandate and associated missions for the journey ahead. Minister Dames noted that the RBDF has grown from 47 members in its “embryonic stages” in the late 1970s, to 250 shortly after becoming an official entity by an Act of Parliament in 1980, to standing at just over 1,500.

“The Force is earmarked for continued growth, and an intake of 120 recruits are expected to enlist within the ensuing weeks, he added.  “Your Force complement is performing [in exemplary fashion], but we are aware of your demand for additional human capital required to adequately achieve your mandate. Therefore, we are supportive of your needs to increase your Force’s strength to at least 2000 by the year 2022.” The church service preceded a march by the RBDF officers and Rangers, who traveled along Tonique Williams Darling Highway, through Yellow Elder Gardens — via Graham and Roberts Drive — and to the Town Centre Mall.