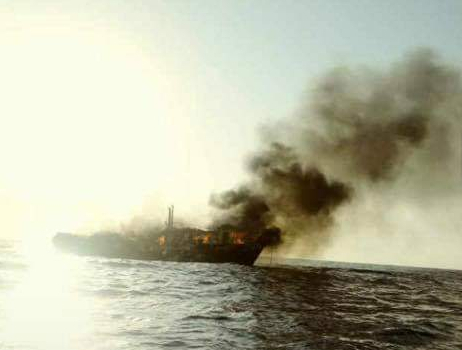 The RBDF is closely working with the Royal Bahamas Police Force, supported by U.S Coast Guard cutter, who are investigating the circumstances of a Haitian vessel that was destroyed by fire, off Stella Maris, Long Island on 30 April 2020. The RBDF Operations Center was alerted to a medical emergency onboard a Haitian Freighter reportedly enroute to Haiti from New Providence around 1:30 am on Wednesday 29 April 20.

The master of the vessel was advised to seek permission from the Designated and Competent Authorities to re-enter the territorial waters/ harbour in Cat Island consistent with the Emergency Orders. However, approximately 3 hours later the master of the vessel advised that the female onboard who required medical attention had passed.
On Thursday evening, the Defence Force Operations Center received a call from Police Operations Room reference an 80-ft steel hull vessel which was on fire off Stella Maris, Long Island or 10 miles off the eastern shoreline of Salt Pond.

Local Police Officials assisted by residents utilizing jet skis responded but were unable to render assistance due to the intensity of the flames on the vessel. Also, rescue efforts were initiated by the Defence Force (aircraft) and United States Coast Guard which were hindered by inclement weather. A search of the surrounding area and shorelines by both the police and residents this morning uncovered 2 Haitian nationals associated with the vessel, who appeared to be a bit dehydrated and slightly shaken up. The Haitian nationals indicated that 8 persons made it to shore and are assisting Police with further investigations.