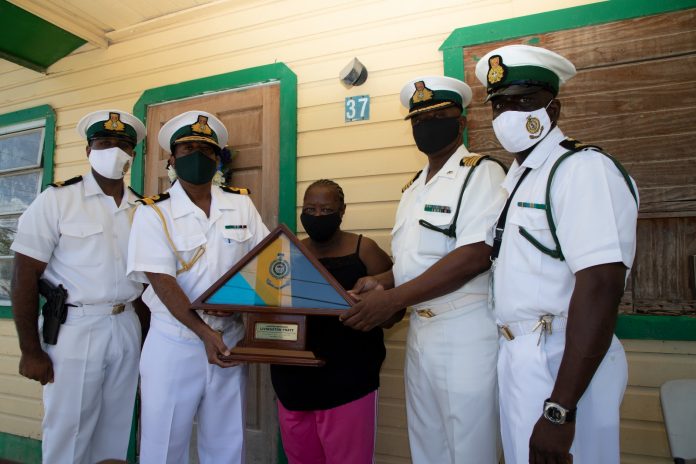 RBDF, The Commander Defence Force, Commodore Raymond King and some members of the Command Team paid a visit to Mrs. Yvonne Pratt, the mother of the late Leading Mechanic Livingston Pratt on September 14, 2020.

Whilst thanking the grieving mother for her son’s service and offering sincerest condolences, the Commander Defence Force also presented her with the Bahamian Flag, known in the military as the Jack, which draped his coffin on Thursday past.

This gesture is a symbol of honour and recognition that the 16-year-veteran contributed in service to his country. He passed away on August 6, 2020. The Bahamian Flag, a national symbol, is ceremonially hoisted and flown aboard all Defence Force craft and satellite bases as a reminder of love and service to country and our solemn oath to guard our heritage. The organization wishes to remind its men and women who serve that their well-being and safety is a paramount priority. (RBDF Photo by Woman Marine Myeisha Gibson)