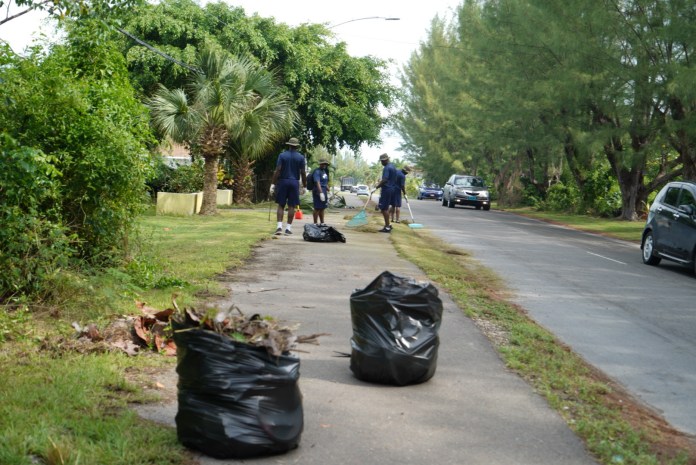 The Royal Bahamas Defence Force Training Department lead by its latest intake of recruits showed their support for the community
they are based in, as they assisted the Coral Harbour community during a clean-up effort over the weekend. The 56 men and women, who make up New Entry 57 Woman Entry 26, were able to pause from their intense schedule of training on Saturday 26 September to remove debris from along the main Coral Harbour thoroughfare. This included clearing fallen trees and branches from the area, and trimming overgrown bushes. RBDF Chief Training Instructor, Chief Petty Officer Dwayne Gibson said, “It was a great
initiative by the recruits, who were eager to lend a helping hand. They were enthusiastic for the opportunity to serve the community and show what it means to be responsible, civic-minded and grateful citizens.

Accompanying the RBDF Recruits were President of Coral Heights East, Ms. Kim Deveaux, President of Coral Harbour south Mr.Charles Hall, and President of Coral heights west, Mr. Kevin Basden, who were grateful for the helping hands. Lieutenant Commander Origin Deleveaux, the Training Officer, said that as a part of fulfilling the Commander Defence Force’s intent of “developing a high-performance workforce that’s focused on performance excellence”, the training program is designed to ensure that corporate and environmental responsibilities are focused components within the recruits’ character and professional development.

The Royal Bahamas Defence Force is committed to “Guarding our Heritage” through opportunities like these where nation building tenets are emphasized to prepare the organization’s future leaders.