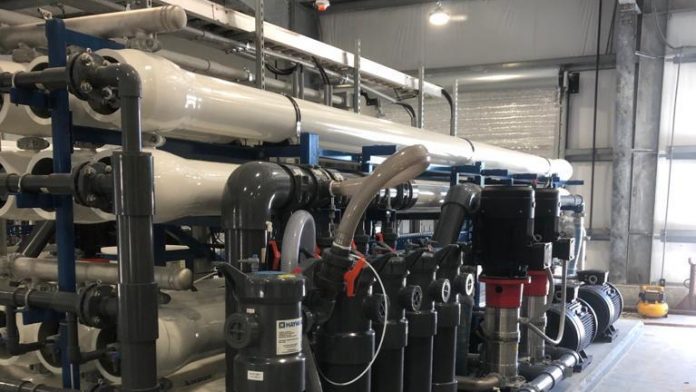 The Water & Sewerage Corporation (WSC) commenced production of water at its newest reverse osmosis facility, today, May 11, 2020 in North Eleuthera. Executive Chairman of the Water & Sewerage Corporation Adrian Gibson stated, “the corporation’s thrust remains the provisioning of safe and affordable water for Bahamians throughout the archipelago. We continue to strive to provide world class service and seek to extend our supply to islands and communities that do not yet have piped potable water and/or sewer services.

“Over the weekend, and following inspections and sign-off, I directed the start up of the Bogue (North Eleuthera) Facility.  Sometime after 7:00 a.m. today, the new plant began producing water for thousands of residents in North Eleuthera (Upper Bogue, Lower Bogue, Current, Bluff), Harbour Island, Spanish Wells and Russell Island.” The new, multi-million dollar facility features a 650,000 imperial gallons per day reverse osmosis unit, with a fully automated system and back up generators. This plant will provide a sustainable and reliable supply of desalinated water for public consumption.

The new facility in Eleuthera is the largest on the Family Islands, and third largest overall. The executive chairman noted, special recognition is made of RO contractor, Suez/Aqua Design. He continued, the people of North Eleuthera, Harbour Island, Spanish Wells and Russell Island will see substantial improvement in their water over the coming days. This plant, coupled with nearly 30 other WSC projects carried out on Eleuthera since 2017, lends to major infrastructural upgrades. It also provides for the expansion of business and industry in North Eleuthera, Spanish Wells, Harbour Island and Russell Island.

“We look forward to formally commissioning the new plant upon the passage of COVID 19,” said Mr. Gibson.  “WSC remains committed to quality and to growth.”