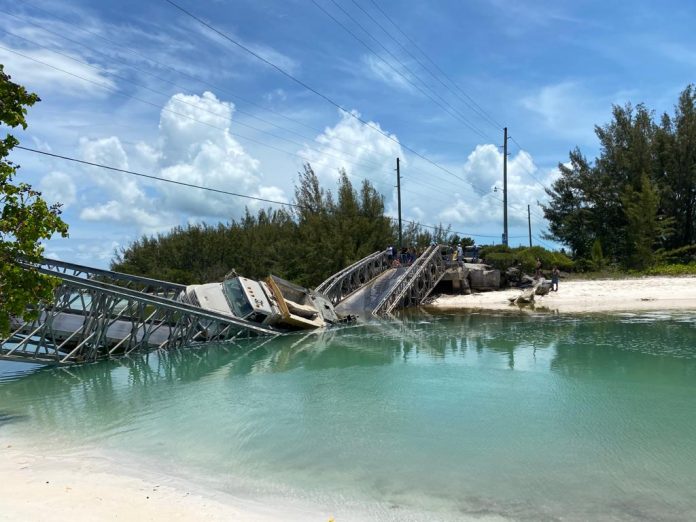 Today the one lane Roderick Newton Higgs Bridge which connects Spanish Wells to Russell Island collapsed. We are thankful that there were no injuries and no lives were lost. As with everything on the island the men of Spanish Wells all came to the rescue and the truck which has been partly submerged has been safely pulled from the water. I commend the men of Spanish Wells for the heroic efforts and unwavering support for each other. The government of the Bahamas had a foresight that something of this magnitude could have happened due to the deterioration of the structure over the 28 years since it was installed under the first Ingraham administration in 1992 after the passage of Hurricane Andrew which completely destroyed the previous bridge.

That is why on July 22nd, 2019 the government of the Bahamas signed a contract with Waugh Construction LTD for the construction of the new bridge to replace the structure that collapsed today. I am pleased to report that the pre-construction material for the new two lane bridge has been delivered and is ready for construction. A barge is en route to the area which will facilitate vehicular traffic between Spanish Wells and Russell Island. We anticipate that all temporary measures should be in place to facilitate the daily routine between Spanish Wells and Russell Island by Friday. We also anticipate the commencement of work to correct the water main as early as tomorrow.

The Government and Waugh Construction (Bahamas) Ltd. will work feverishly to commence the reconstruction on this new bridge so as to keep the inconveniences at a minimum and totally facilitate the island as soon as possible. In reference to the “red brackish water” which can be seen gushing from the broken water main, even though I am advised that the reverse osmosis plant is completed an awaiting to go online, to say that I am highly disappointed that this facility which is so
badly needed has taken far, far to much time to come on stream, is an
understatement. In my mind there is no justifiable reason as to why the citizens of North Eleuthera, including them of Spanish Wells & Harbour Island are not being provided with good portable water. I will await with bated breathe as to the explanation from the Water & sewage Corporation.