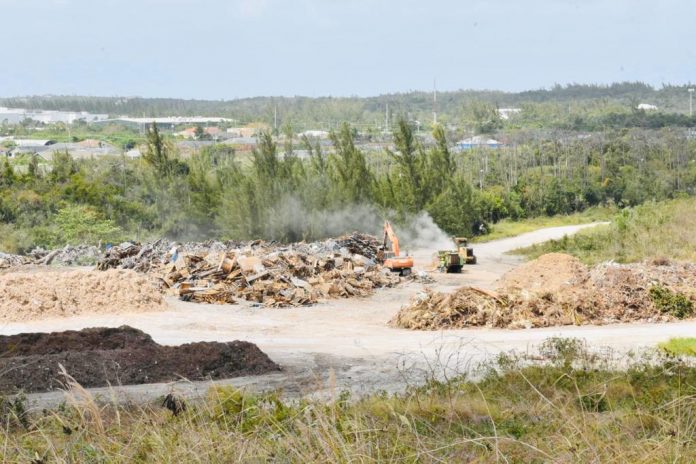 The transformed New Providence landfill, now known as the New Providence Ecology Park, plans to roll out a recycling program that will accept cans, glass, plastic, aluminum, cardboard and mixed paper, said NPEP chairman Mr. Felix Stubbs. The recycling plan is part of the next phase of improvements at the site that was once plagued with long-standing problems, including fires. “Chronic problems that plagued residents in the neighboring communities and Nassauvians at large for many years are now a thing of the past,” said Mr. Stubbs.

Between now and September, NPEP also expects to install a modernized scale system, establish a robust composting program that will turn rubbish into compost and soil that will help rehabilitate the site, and an e-waste recycling program to properly manage computers
and other electronics and keep them out of the landfill. On Wednesday, Prime Minister the Most Hon. Dr. Hubert Minnis got a first-hand look at the NPEP during a tour of the facility. The Prime Minister was accompanied by Deputy Prime Minister and Minister of Finance, the Hon. K Peter Turnquest; Minister of Works, the Hon. Desmond Bannister; Minister of the Environment, the Hon. Romauld Ferriera; and Mr. Don Saunders, MP. The tour was led by Mr. Timothy Hodge, NPEP Operations Manager, and included Mr. Stubbs and other NPEP Board members.

After almost a year in operation, NPEP, which employs 65 Bahamians, is becoming one of the best facilities of its kind in the region, said Mr. Stubbs. The vision is to create a lush 300-acre ecology and industrial park that will reap economic, social and environmental gains for generations of Bahamians to come, said Mr. Stubbs. Since March 2019, NPEP has:

• Extinguished fires at the site and greatly reduced the risk of future fires;

• Cleaned and organized the landfill, transforming what was once an “open waste” dumping ground into a clean, safe and organized park – 100 percent compacted, capped and contained;
• Created and maintained proper roads and established specific treatment of areas for the various types of waste received;
• Rerouted and contained the overflowing septic waste at the Park;
• Started reusing and recycling onsite materials and waste to maintain and revitalize the Park;
and.
• Shredded organic materials and turned back to soil. In less than 12 months, one of the most significant, longstanding environmental and social hazards in The Bahamas has been transformed into a clean, compacted and revitalized ecosystem, said Mr. Stubbs.