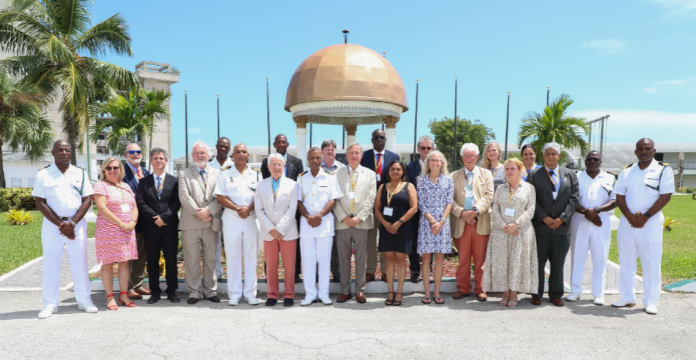 The two incoming Commissioners are Professor Howard Roe, Emeritus Professor at the University of Southampton (serving a third term); and Mrs. Rochelle Newbold, Acting Director of The Bahamas Environment, Science & Technology (BEST) Commission. They will each serve a three-year term in their personal capacity. The Declaration requires that the Commissioners themselves be “distinguished scientists and other persons of international repute committed to the conservation of high seas ecosystems that would serve in their personal capacity.”

The new Commissioners will work alongside current Commissioners Dr. Tammy Warren, Professor Stephen de Mora, Mr. Mark Spalding, Sen. Wilfred Moore, and Mr. Frederico Cardigos. The Minister of Home Affairs, the Hon. Walter Roban, JP, MP, said, “My Ministry is pleased to be leading the work of the Government of Bermuda in support of the Sargasso Sea Commission, which has already established itself as a unique and important player in its critical work as a steward of the Sargasso Sea.” The Bahamas Government, in 2016, signed the Hamilton Declaration and the Ministry staff has remained very active with the Commission. In 2019, its commitment was reaffirmed with the Ministry of Foreign Affairs of The Bahamas sending a representative to the Fourth Joint Meeting of the Sargasso. Sea Commission and the Signatories held in St George’s, Bermuda, on March 15, 2019. Later that year, on July 29-31, the Sargasso Sea Secretariat, through the Min. of Foreign Affairs, hosted a successful three-day Meeting of Commissioners and Ocean Experts at the Royal Bahamas Defence Force Base. Mrs. Newbold’s appointment is timely as the Min. seeks to encourage Bahamians to be more cognisant and proactive in Ocean issues.

Mr. David Freestone, Executive Secretary of the Sargasso Sea Commission, warmly welcomed the appointments. He said, “We are delighted to have the continued support of the Government of Bermuda, but also of the United Kingdom and The Bahamas within the Commission. These appointments further strengthen the Commission team as we move into the next decade of the project.” The Sargasso Sea Commission is appointed by the Government of Bermuda, with the support of the ten Government Signatories of the Hamilton Declaration. Its formal role is to act as the steward of this iconic high seas ecosystem and to keep its health, productivity, and resilience under review, as well as to develop safeguard measures for its conservation.

As of January 2020, the ten Signatory Governments to the Hamilton Declaration are the Azores, The Bahamas, Bermuda, British Virgin Islands, Canada, Cayman Islands, the Dominican Republic, the Principality of Monaco, the United Kingdom and the United States.