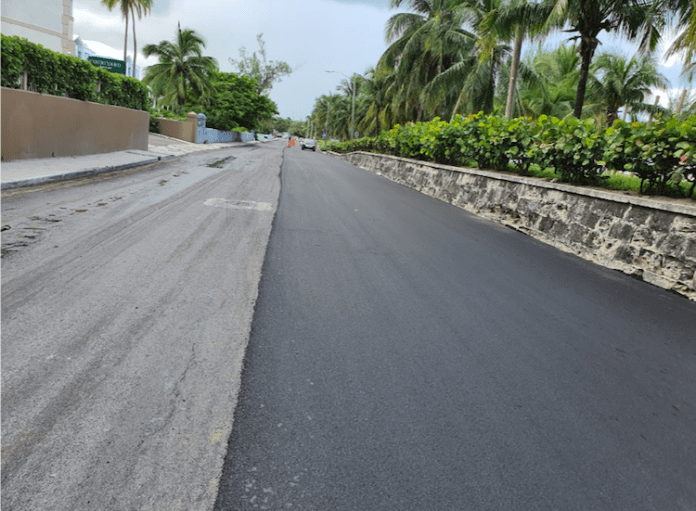 The road paving exercise on West Bay Street between Nassau Street and Marcus Bethel Way is officially completed, Works Minister the Honourable T. Desmond Bannister confirmed Monday. “I’m happy to announce that Bahamix is making tremendous progress paving different thoroughfares throughout the island. Despite the establishment facing a number of issues that prevented the project to be completed on time, Bahamix is making good headway,” Hon. Bannister said. “I’m also happy to report that Bahamix repaved the testing area on Fort Charlotte where driving students practice and take their practical examination.” Bahamix General Manager, Mr. Ryan Rahming, said the area paved on West Bay Street is a temporary surface layer and was done to make the roadway more passable for motorists.

“The surfaces are temporary as a number of utility companies have major work to do in that section of West Bay St., however, they are not able to yet programme the works. The Ministry in conjunction with Bahamix decided that it’s more beneficial for us to go ahead and pave the roads to provide relief to the motorists” he said. “It is Bahamix’s intention to overlay a section of Soldier Road this week. The exercise will incorporate the section of the road between Robinson Road and Bernard Road junction.” Mr. Rahming said a myriad of issues prevented the projects from being completed on schedule.

He said, “Due to weather conditions we were forced to stop paving. Other issues that affected the roadworks were equipment malfunction and a problem at the Bahamix asphalt plant. We also paved the test area at the Fort. The area has been repaved and now needs to be striped by the line striping section in the Ministry of Works.” The paving of Faith Avenue between Cowpen Road and Marshall Road will commence after Bahamix has completed emergency repairs on Soldier Road.