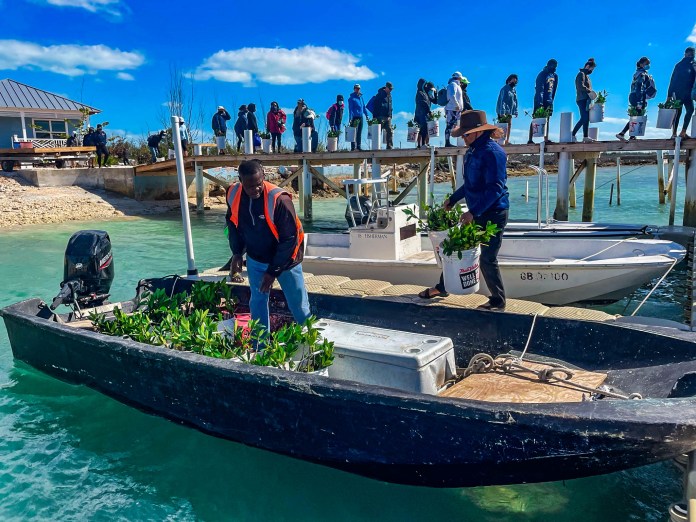 Saturday, January 29, 2022 dawned bitterly cold and windy…one of the coldest days on record in the northern Bahamas, but near-freezing temps did not deter Justin Lewis, Bahamas Initiative Manager of Bonefish Tarpon & Trust (BTT), a Florida-and Bahamas-based conservation organization, and nearly 40 volunteers on a mission, from joining a mangrove planting event led by BTT in East End, Grand Bahama. The planting marked World Wetlands Day, officially celebrated on February 2 to raise global awareness about the vital role wetlands play for people and planet.

Lewis and members from MANG GEAR, Bahamas National Trust, Kiwanis Club, Ministry of Tourism, Investments & Aviation, Department of Marine Resources and Forestry Unit from the Ministry of Agriculture & Marine Resources, with friends of the environment and local bonefish guides along with students from Bishop Michael Eldon School and Lucaya International School braved the cold to be ferried by boat from East End Lodge, which hosted the event, and transported across the flats to wetlands in the Rocky Creek area, which were heavily damaged by Hurricane Dorian two years ago.

The area where the replanting took place was especially critical, according to Lewis, after a comprehensive survey showed that Hurricane Dorian in 2019 destroyed 74% of the mangroves that once protected Grand Bahama shores and may have saved lives by doing so during the powerful Cat 5 storm.

Students and representatives worked in tandem to plant 2,434 mangrove seedlings, bringing the total number of seedlings planted to date to 18,783. Their volunteer work is part of a BTT’s Northern Bahamas Mangrove Restoration Project started in December 2020, with the goal of planting 100,000 mangroves within a 5-year period.

“Mangroves are not only nurseries for many species, they also act as buffers against a storm or rising waters, help to stave off coastal erosion and can save human lives by being a barrier that absorbs and lessens the impact of oncoming wind and waves,” said Lewis. The recent undersea volcanic eruption in the southeast Pacific which triggered tsunamis with 15-foot waves causing catastrophic damage in Tonga, an archipelago of islands in the South Pacific, underscores why replanting the mangroves in East End is urgent for the extent of protection they provide.

“Partnership is key. It was a windy 57 degrees on the water, and I was really pleased to see so many representatives from various organizations within the community out working together, especially the students.

The mangroves in the Rocky Creek area are completely dead and will not be restored without replanting efforts,” said Lewis. Students were able to see the devastation first-hand and learn the vital role that mangrove forest play in coastal ecosystems and why communities must work hard to conserve them.

Among the most valuable assets protected by mangroves are bonefish, the silver, clever dodgers known as the gray ghost of the flats because of their ability to blend into the flats habitat and avoid capture. Protected by legislation, bonefish are the center of attraction in a catch-and-release sport that adds $169 million to the economy annually in lodging, food, boat rentals, bonefish guide fees and more. BTT is planning another planting event at the end of February in Abaco where about 40% of the shoreline mangroves were destroyed by Hurricane Dorian.