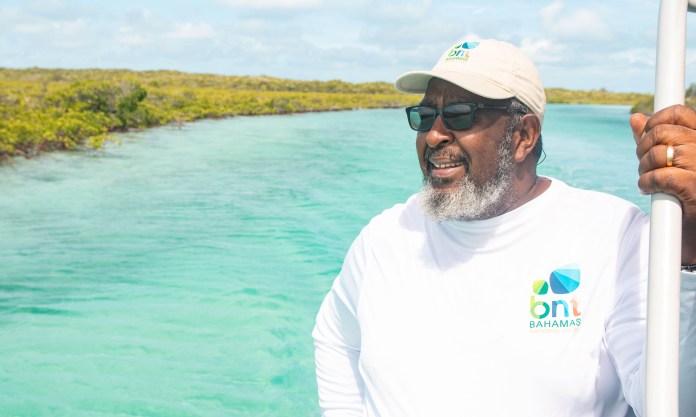 Today The Bahamas National Trust (BNT) announced that Eric Carey will step down as Executive Director on December 31, 2022. During his fifteen-year tenure as Executive Director, over $60M in revenue was raised for the BNT. Eric has overseen dynamic organisational growth, taking BNT from a small non-profit to an environmental powerhouse of thousands of dedicated members, staff, park wardens, and both a Bahamian and international community of donors. The BNT is exceptionally proud of the impact it has achieved with Eric at the helm.

Focused on the Trust’s three strategic priorities – Parks, Science, and Education – Eric has led the development of a world- class National Park System, helped save iconic Bahamian species from extinction, and played a key role in transforming the conservation landscape in The Bahamas. On his watch and through the efforts of the BNT, important species such as sharks, sea turtles and the Nassau Grouper gained legislative protection. Eric leaves a powerful and proud legacy for the next generation of Bahamians and global citizens who will reap the benefits of The Bahamas’ world-renowned National Park System.

“My time with the BNT has been the highest privilege of my life. I’ve had the opportunity to manage and safeguard some of our country’s most precious jewels – our national parks – and all they have to offer,” said Carey about his time at the BNT. “Although I’m sad to close this chapter of my life and in the BNT’s history, today we are on strong footing and the time is ripe for fresh leadership. I plan to welcome my successor with full support and greatest anticipation for what they will do to steer the organisation along the path of the future.”

About the rest of the year, Carey added “As far as I’m concerned, I am dedicating the remainder of my tenure to advocating for science and nature, and most importantly to driving an even stronger financial future for the organisation to set our new leader up for success.”

Eric expressed thanks to friends, colleagues, partners, and the BNT Family for their support – both for him as Executive Director, and for the BNT itself. He called for continued support of the organisation, whether in kindness and encouragement, through membership, donations, volunteering, advocacy, spreading awareness, and for caring for the environment every day.

“If I’ve learned anything in my time as Executive Director of the BNT, it is that it’s the collective, often small individual acts of conservation that makes a big difference. And, that we are all called to be stewards of our environment. It is our shared heritage, responsibility, and reward.”

Carey is always the first to point out that the fight to protect the environment is ongoing, and the work of the BNT is more important now than ever. Urgent challenges include: combatting increased pollution and poaching, mitigating the various impacts of climate change, creating awareness of at-risk conch populations and reversing the damage done by environmental epidemics like Stony Coral Tissue Loss Disease (SCTLD). Carey also continues to play a crucial role in resolving the country’s seeming unwillingness to release scientific research permits to Bahamian and international scientists alike.

His legacy is one of making an environmentally sustainable future more attainable for all Bahamians, and, in raising the profile of The Bahamas and its park system on the global stage. He encouraged all Bahamians to get involved – to visit the parks, become BNT
members, and to support efforts to conserve and restore ecosystems in their own backyards.

“After 20 years of dedicated service to the BNT, Eric’s departure marks the end of an era for our BNT Family. In that time, Eric has transformed the BNT into a truly national organization that Bahamians identify with and embrace. His steady leadership through thick and thin has forged the path for our exceptional future,” said Geoff Andrews, President of the BNT Council, the organisation’s 29-member governing board as created by Bahamian law.

“The entire Council and I want to sincerely thank Eric for his outstanding dedication and leadership through the years. We wish him the very best in his future endeavours.” The BNT Council has initiated a formal process to identify its new Executive Director. They stated that further information will be forthcoming in May.