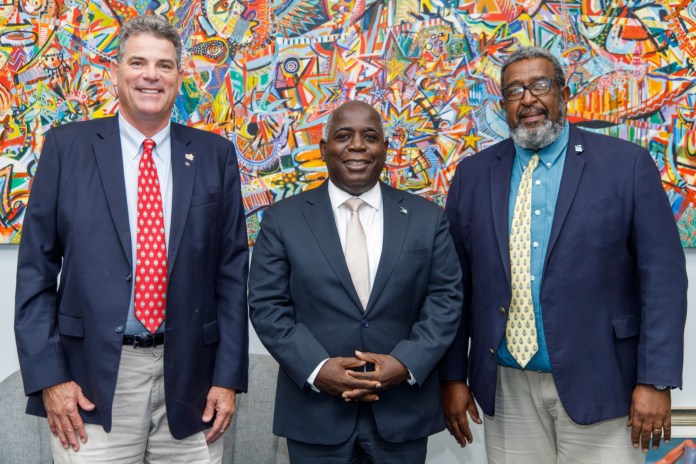 The visit afforded the opportunity to discuss a number of important environmental matters, including climate change and the advancement of marine protected areas (MPAs) throughout the country – both of which are the focus of ongoing projects by the
BNT.  The organisation’s president and executive director also shared upcoming projects the BNT is working to advance, for which the PM voiced his support. This included the development of a botanical coastal reserve in Harbour Island, and the creation of
Seahorse National Park in North Eleuthera.

Of special note, the Prime Minister expressed his firm support for the finalization of the leases to create five national parks in San Salvador. The BNT representatives indicate the creation of these parks will have a positive impact on San Salvador’s economy; and
advised that the organization is already in discussions with the Ministry of Tourism on initiatives to revive the  San Salvador diving industry that once had the island as the premier location for diving experiences in the Caribbean.

The BNT also expressed its commitment to working with the Prime Minister to advance climate change initiatives in The Bahamas, including carbon credit initiatives.  Mr. Andrews said, “The Prime Minister has a record of working closely with the BNT. His support has been integral to several key projects in the past. We’re excited to hear about his interest in and commitment to the work we do to protect the environment, safeguard our national parks, and further conservation throughout The Bahamas.”

Previously, it was under Mr. Davis’ leadership as Minister of Works that the BNT was able to begin to transform Bonefish Pond National Park into a place where Bahamians and visitors can enjoy nature, in a national park that represents wilderness just off the edge
of urban development.

Mr. Carey said, “While the BNT is a non-governmental organization, we work closely with the government to achieve our conservation goals. Their support is crucial to our work. Conversely, we are always willing to lend the resources and capabilities we have to support government initiatives that advance the conservation and protection of our natural resources and unique Bahamian environment.”

Andrews and Carey thanked Prime Minister Davis for his commitment to completing the leases for national parks in San Salvador and his administration’s support for other BNT initiatives.

“The work of the BNT is much too vast to be accomplished by any one entity. Our achievements and success in the conservation field are a combination of the hard work and cooperation of our passionate and dedicated staff, donors, volunteers, corporate partners, and government. The record shows when we work together so much more can be accomplished, so we’re excited to have had this meeting with Prime Minister Davis and hope this is a sign of good things to come,” said Carey.