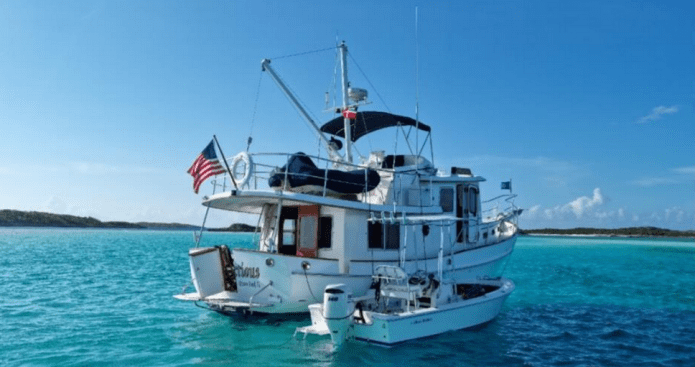 On July 1st, 2022, the BNT apprehended a vessel in the Exuma Cays Land and Sea Park that was suspected of poaching. Upon inspection of the vessel, it was discovered that there was spiny lobster (crawfish) onboard, which is currently out of season. This included an egg-bearing female lobster. The suspected poachers were briefed on their infractions and taken to Warderick Wells for further questioning and processing.

It was nearly sunset at the time of processing, and the BNT enforcement team opted to not transport the suspected poachers to Nassau at night out of safety concerns. Furthermore, because of the lack of proper holding facilities in the park, the suspects were allowed to return to their vessel and were informed the matter will be further addressed in the morning. The BNT also issued a stern warning that if they left the country, they would be pursued under the Lacey Act in the USA. The Lacey Act is a US Law that allows the US Government to persecute individuals who violate wildlife laws in other countries. This act would bear more significant fines and penalties for their infraction. The BNT expected this warning would be enough to deter the accused from leaving the park. Unfortunately, this was not the case, and the organization discovered the suspects had left the park around 5am the next morning.

The BNT immediately contacted members of the Bahamas Wildlife Enforcement Network (BahWEN) who then alerted Bahamian and U.S. authorities on the vessel and individuals involved. The organization also posted a photo of the suspect’s vessel to social media asking the public for information on the whereabouts of the vessels and crew. Members of the boating community reportedseeing the vessel and reported hearing them being hailed by the U.S. Coast Guard. The BNT was later contacted by the suspects, who were at this point 4 miles offshore of Grand Bahama. The BNT advised them to turn themselves into the nearest police station. The BNT later met with the police in Grand Bahama to provide more information and ensured that the evidence that was confiscated during the apprehension was turned over to police.

The BNT was advised on the evening of July 4th, that the suspects were released from police custody pending further investigation. On July 5th, the vessel and its occupants were observed departing the dock. Despite repeated requests by the organization, the police refused to confirm to the BNT whether they intended to charge the suspects after further investigation, or whether they are free and clear to leave the country. If the latter is the case, the BNT is utterly disappointed in this outcome, and does not agree that this was the right decision.

“It’s disappointing time and time again to see these park violations go undisciplined, and this is why we must call on the police & the courts to see these instances through by imposing fines & repercussions as allowed for in the BNT Act. By not issuing fines to poachers and others who violate park regulations, we feel this sends the wrong message and will encourage poaching in the future.” – said BNT Executive Director Eric Carey.

“The point must be made that we take these offences to our natural resources very seriously. We must also urge all visitors to do their part – not only to respect the park rules & regulations – but to also report any instances of illegal activity that they observe in parks. The ECLSP is a very special place -the oldest land & sea park in the world – and we owe it to ourselves to protect this amazing resource and give it the respect that it deserves.” He continued.

Unfortunately, poaching remains a constant threat in the Exuma Cays Land & Sea Park. BNT wardens work day in & day out to deter this threat by conducting routine patrols and acting on community supplied intelligence. Until a strong example is made out of the perpetrators, The BNT fears these instances of illegal poaching & harm to our pristine environment will continue to rise.

The BNT has been working with The Office of the Attorney General & Ministry of Legal Affairs to finalize the Bylaws for all national parks. These bylaws will give BNT wardens more authority in national parks and allow wardens to facilitate the immediate issuing of fixed penalties on the spot for park violations. BNT Wardens can collect the fines for forwarding on to the government, without having to go through other authorities for prosecution.

On July 4th, three (3) days after this incident, The BNT was notified that the bylaws were officially gazetted into Bahamian law. The BNT acknowledges some missteps were made during our apprehension and processing of the suspects, and duly notes how we can better manage these situations in the future. Even though the outcome of this situation is unsatisfactory, the BNT is still very committed to protecting national parks and will double down on its enforcement and park patrol efforts.