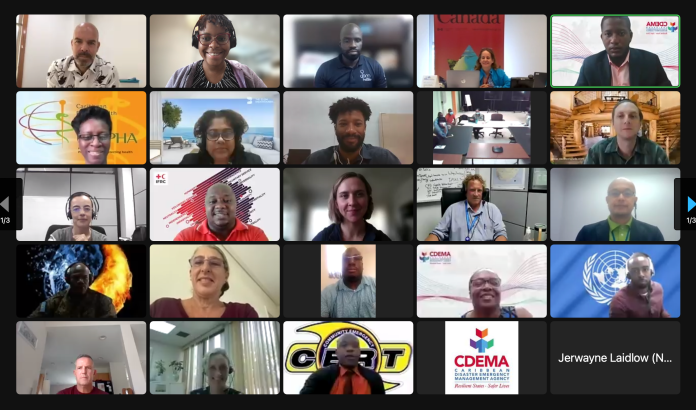 As the 2022 Hurricane Season approaches, the CDEMA Coordinating Unit (CU) hosted its fourth annual Exercise SYNERGY virtually on May 22, 2022, to build preparedness for the potential multi-island, multi-hazard impact threat to the region. Over 50 regional and international stakeholders attended SYNERGY, a flagship regional exercise to test the coordination within the Regional Response Mechanism (RRM).

Deputy Executive Director (ag) of CDEMA, Andria Grosvenor, welcomed the regional and international partners by sharing the importance of Exercise SYNERGY to the strengthening of the RRM.

She said, “An effective response to an impacted Participating State can only be made possible via strengthening, coordination and ensuring the key players come to an agreement on how we work together, before we have a disastrous impact.” The unprecedented events of 2021, amid the COVID-19 pandemic, saw the activation of the RRM to support multi-island impact.

Grosvenor referred to the timely hosting of last year’s Exercise SYNERGY, which examined a multi-island strike, with the impact of a hurricane and a 7.0 magnitude earthquake. Just weeks later, on August 14, 2021, Haiti was impacted by a 7.2 magnitude earthquake and subsequently, Tropical Storm Grace made landfall. She explained, “Due to the Exercise [SYNERGY], the CDEMA CU was already aware of the pledges, tentative capacity, and capability of regional and international RRM partners which aided in a timely response.”

We heard in the After-Action Review (AAR) that the RRM continues to serve the region well. Certainly, Canada remains a keen supporter of the system and an advocate for the mechanism.” The CAD $8 Million Project which commenced in 2019 has played a key role in enhancing the RRM, namely the establishment of CDEMA’s Integrated Regional Logistics Hub and a donation of $500,000 CAD to St. Vincent and the Grenadines to support recovery efforts.

Participants of SYNERGY came together for robust war-gaming discussions on the scenario of responding to a Category 5 Hurricane impacting several CDEMA Participating States (PSs) concurrently. Findings from SYNERGY will be used in the annual update and review of the Regional Coordination Plan.