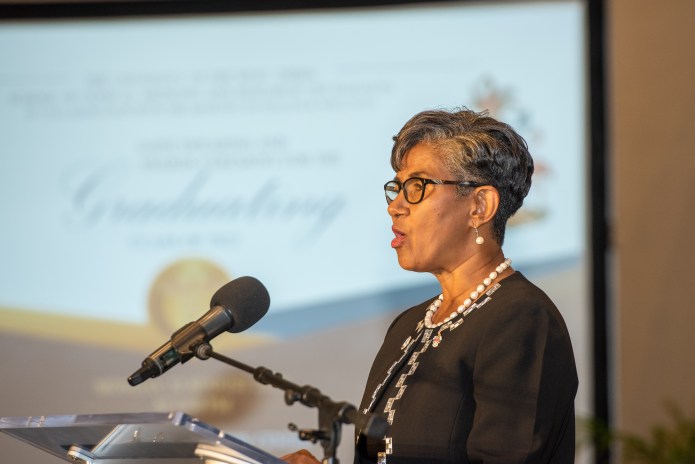 In August, the University of the West Indies School of Clinical Medicine & Research (SCMR) in The Bahamas announced a passing of the leadership baton from one dynamic medical professional to another. Dr Corrine Sin Quee has been appointed program director following the retirement of Dr Robin Roberts from that distinguished post.

As a member of the selection committee, Dr Roberts applauded the appointment of his successor. “Dr Corrine Sin Quee is an undoubted leader in the medical process and in her area of specialty, not only in The Bahamas but also regionally and internationally. Hers is a record which speaks for itself. I wish for and expect of her a tenure gilded with laurels,” he said.

Dr Sin Quee’ s CV bears out her predecessor’s high praise. She is the only pediatric hematologist/oncologist in The Bahamas and has steadily built a peerless reputation in the field. A graduate of the UWI School of Medicine, she pursued residency training in New York and New Jersey in the United States but returned to The Bahamas immediately following her completion of her fellowship training at New York University in 1991.

She is board-certified in Paediatrics and Paediatric Haematology-Oncology and a lecturer in Child Health for the University of West Indies and is actively involved in postgraduate training in Paediatrics and Family Medicine. She is a member of important local and international medical organizations (AAP, ASH, ASPHO and SIOP) and has maintained important links with many of her US and Canadian colleagues with ready access to current treatment protocols.

Dr Sin Quee has spoken often to the importance of hematology and oncology.

“Hematological diseases such as hemophilia and sickle cell anemia and cancer in children, tend to come as a surprise to the general public, especially in the case of hemophilia, which many non-professionals may dismiss as a Victorian malady. However, they do occur and must be treated vigorously to give such patients the best chances for quality of life and long-term survival,” Dr Sin Quee says.

Dr Sin Quee is regarded as one of the field’s active leaders in the Caribbean region. She plays an important, active role in the Sick Kids-Caribbean Initiative, serving as Co-Lead Physician for the Caribbean. She says that it is “an important project in pooling resources and working together to improve the quality of care in cancer and blood diseases for our children in the region”. She notes further that the initiative has broadened her involvement at an international level, as she is a part of the PAHO Childhood Cancer Working Group and the Bahamas National Coordinator to the ASH Children’s International Consortium on Acute Leukemia (CICAL). She has been appointed a member of the American Society of Hematology International Members Committee for 2022-2025.

As a strong, internationally respected advocate for children with cancer and blood diseases, Dr Corrine Sin Quee serves as medical advisor to the Bahamas Sickle Cell Awareness and Hemophilia Foundations and Associations and is actively involved with the Cancer Society of The Bahamas screening assistance program.