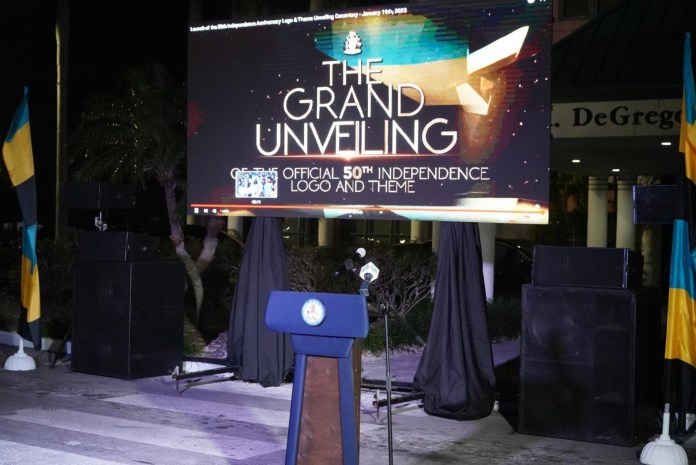 The countdown to the country’s 50th anniversary of independence began with a Grand Unveiling of the Official 50th Independence Logo and Theme in Rawson Square on Thursday, January 19, 2023.

Residents in Grand Bahama, including Minister for Grand Bahama, the Hon. Ginger Moxey, Senator Kirkland Russell and other dignitaries, gathered on the lawn of the Harold Degregory Complex for a Logo and Theme Launch ‘Watch Party.’

Residents throughout the Family Islands gathered in a similar fashion and watched the celebrations, Bahamian culture, music and of course a rush out from the reigning two-time Junkanoo parade champions, One Family, officially kicking off the road to the country’s Jubliee.

The theme for this year’s celebrations: One Nation. Our Legacy. Our Future.

In Grand Bahama, those watching on the big screen feasted on Bahamian treats, from traditional cakes to flavored drinks to bush and medicinal teas.

Prime Minister Philip Davis, during his address, encouraged residents to make 2023 a year to remember by pledging to participate in at least one
activity planned for the 50th celebration and to making the community stronger.

Chairwoman of the Independence Secretariat Leslia Miller Brice revealed Thursday that the logo was the creation of a compilation of three Bahamian artists — the top three finalists — whose work was chosen after hundreds of concept submissions.

Minister Moxey, who is a member of the 50th Independence Cabinet subcommittee, was excited about the official kickoff, the turnout from the residents and the fact that the opportunities Bahamians have today is as a result of our forefathers’ struggles.